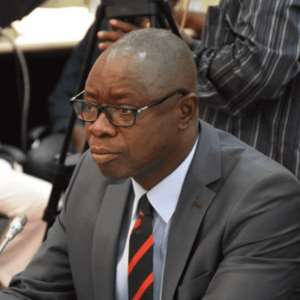 Sunyani Butchers Association in the Bono Region have accused the Land and Natural Resources Minister Kweku Asomah Cheremeh of using his office to purchase their land, eject them and sited a fuel station on the land which located in the middle of the market.

They said checks revealed that the land has been transfered into the name of one Nana Adu Adjei, a 17year old student of Achimota Senior High School, who happens to be the son of the Minister, is a former Regional Minister of then Brong Ahafo Region.

They also accused the Sunyani Municipal Assembly of aiding the Minister to cease the land they have been operating on even before the Minister was born.

This was contained in a open letter signed by the Chief Butcher of the Concern Butchers Association, Alhaji Seidu Mohammed AKA (Alhaji Zongo).

The group added that the land has over the years created employment for over 200 Butchers in the area, a strong hold of the ruling NPP.

According to them, due to the transfer of ownership of the land, they have been rendered jobless.

Below is the full petition:

The Republic of Ghana

Mr. President, I write this letter with a heavy and furious heart however, I would begin by sending you warm greetings from the walls of sunyani zongo and also congratulate you for settling a long standing dispute at Dabgon. We are forever grateful.

However Mr. President, there is something very serious and disastrous happening in the Bono Region and I would like to bring to your notice in my capacity as an elder of the Zongo Community in the Sunyani township and also as a Senior and Chief Butcher of the Concern Butchers Association at the Sunyani Slaughter House in the Bono Region.

Mr. President, my message is simple and I will proceed by stating my points and explain them below seriatim:

1. Mr. President, please all is not well at all in the Bono Region. Because the Sunyani Municipal Assembly has conspired with certain persons to transfer the land on which the Sunyani Slaughter House is situated to one Nana Adu Adjei a 17 year old student of Achimota Senior High School in Accra. Our checks clearly indicates that, the parcel of land was purchased by Hon. Kweku Asomah Cheremeh the Former Brong Ahafo Regional Minister and now Lands and Natural Resources Minister in and with the name of his son.

2. The land has over the decades created employment for over 200 Butchers who had their daily bread from the slaughter house. However due to the transfer of ownership of the land, this has rendered the zongo boys jobless.

3. Mr. President, our checks indicate that, Hon. Asoma Cheremeh is behind the construction of a fueling station on the land which is located inside the market. We think this is very bad and a selfish decision by your Minister.

4. Mr. President, you can verify from your records and same will prove to you that, Sunyani Zongo was the first zongo the NPP won and has been winning here since the 1992 constitution was promulgated. But Mr. President I assure you that 2020 will be the first time NPP will lose at Sunyani Zongo. Because the victory chalked by the party over the decade has been through the instrumentality of some of us but now, our own party wants to turn against us and take our daily bread from our mouths.

6. Mr. President, it is important to note that we have occupied the land for the past 70 years now. No one has ever tried to vacate us from the land not even our political opponents. The land has undoubtedly fed millions of the inhabitants of the Zongo Community. But now, one man has decided to take this away from us. Mr. President, as at the time we took possession of the land, even Asomah Cheremeh himself was not born.

7. Your Excellency, I am humbly pleading with you to allow your National Security to come down to Sunyani Zongo Slaughter House to probe this matter and ascertain the velocity of the facts for your perusal. Mr. President, we have channelled our grievances through the leadership of the NPP party in the Region but they have all declined to take up the matter for strange reasons. On one occasion, a member of the Regional Council of Elders told me that, Asoma Cheremeh is very powerful and most of the Executives dread him that is why they have all decided to keep a blind eye.

8. Your excellency, I would like to state unequivocally that, if the party has decided to abandon us, they should also forget about Sunyani Zongo. Because if they dare come here even for campaign, I can predict the reaction of the irate zongo youth.

Mr. President, it is our prayer you treat this matter with all seriousness to immediately ascertain the efficacy of the matter because we are suffering.

Thank You and may Allah bless you.