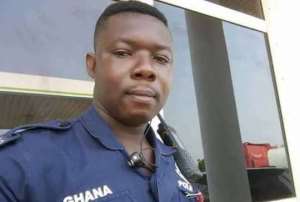 An Accra Circuit Court on Thursday remanded Lance Corporal Godzi Frederick Amanor, the policeman who assaulted 36-year-old Patience Osafo, whilst she was carrying a baby at Midland Savings and Loans, Shashie branch in Accra, on Friday July 20.

Lance Corporal Amanor, popularly known among his colleagues as Skalla, and stationed at the Accra Regional Police Operations Unit, pleaded not guilty to the charge of assault.

He will however re-appear on August 9.
The Police Administration earlier in a statement issued to the media, said in line with service disciplinary procedures, had constituted a panel to handle the issue and come up with the appropriate sanctions for the Lance Corporal, whose action has since last Friday, July 20 generated a lot of backlash from the public.

The statement signed by Assistant Commissioner of Police (ACP), Mr David Eklu, Director General of Police Public Affairs, also outlined a number of actions taken by the Police Administration since the case relating to the video of the policeman assaulting the woman at Midland Savings and Loans in Accra went viral.

The Police Actions included the immediate identification of the policeman shortly after the video had gone viral, leading to his arrest and placement in custody and commencement of investigations into the case.

Additionally, the Police Administration said it contacted the victim and her statement was taken by the Police to get her side of the story, whilst a medical form was issued to her and the baby who were seen in the video.

According to the police administration, the victim and the baby had been treated at the Police Hospital and discharged.

According to the statement, the Police Administration further condemns the behaviour of the officer as being contrary to professionalism and tenets of the ongoing police transformation programme.

The statement added that following that conduct, the Police Administration had issued a stern warning to all police officers, reminding them to desist from such human rights abuses and misconduct.

It assured the public that the outcome of investigations into the Officer’s conduct shall be published.

Last Friday July 20, Ghanaian social media platform was loaded with a policeman who mercilessly assaulted a customer at Midland Savings and Loan at Shiashie.

The video showing the policeman, later identified as L/CPL Amanor, was pummelling the woman who had gone to the Midland Savings to withdraw her money.