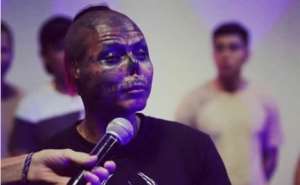 Kalaca Skull, a 22-year-old tattoo artist from Colombia, has been making headlines all over South America for undergoing extreme surgical procedures to make his face look like a skull.

Born Eric Yeiner Hincapié Ramírez, the young tattoo artist claims he had been fascinated by skulls ever since he was a child, but only started turning his face into one after his mother’s death, two years ago, because she didn’t approve of the idea.

First, he had the lower half of his nose removed, because, well, skulls don’t have noses. They don’t have ears either so he had most of his ear lobes cut off as well. But his transformation didn’t stop there.

Kalaca Skull was the first person in Colombia to voluntarily have his nose and ears mutilated, a decision that attracted both the attention of the media as well as a lot of criticism from the general public. Most people don’t understand why anyone would want to have their nose and ears cut off, but the 22-year-old isn’t asking for their understanding, just their acceptance of his wishes.

“Body modifications are a personal decision and should not be judged,” Kalaca Skull told Rio Noticias . “It is like judging a woman for getting breast or buttock implants.”

“For me, a skull is like my sister, a part of my family really, I feel very attached to them” the young Colombian said in an interview , adding that a big part of why he chose to make himself look like a skull was that it’s a look we all share underneath our skin, and in death.

Kalaca Skull admits that his unusual appearance makes a lot of people uncomfortable. Some even cross the street when they see him, just so they don’t have to pass by him, but he insists that despite what people may think of him, inside, he is a good man.

“On the contrary, I am a normal person who just happens to look a lot different than most other people. It’s like a different way of thinking, of dressing, a different style of music. I just feel good the way I am,” the young tattoo artist said.