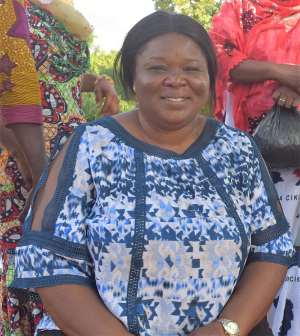 The Director of Operations for the Ghana School Feeding Programme (GSFP), Mrs. Doris Utuka Gaba has encouraged soybean farmers in the five regions of the north and other parts of Ghana to increase their productivity to support the feeding programme.

According to her, the GSFP management was enforcing the Government’s home grown school feeding policy, which requires the use of foods produced by local farmers. Adding that the use of soy products in the preparation of meals by caterers of the programme in the various districts across Ghana is high on the agenda in order to create more market for the produce and also reduce poverty among the farmers.

She said Texturized Soy Protein (TSP) produced locally by YEDENT Agro Processing Company based in Sunyani is being introduced to GSFP caterers and parents in communities for the preparation of meal to serve as a major source of protein for children.

Speaking at the ongoing regional capacity training for caterers, cooks and district nutrition officers of the GSFP at Tumu in the Sissala East Municipality, Mrs Gaba said it is therefore important for the farmers to make the produce available at all times. The training programme is being funded by the World Food Programme (WFP) with technical support from partnership for Child Development (PCD).

Mrs. Gaba assured that the school feeding programme will continue to work with the local farmers and create the needed market for them.

She however warned the caterers not to stop adding meat or fish products to the meals prepared for the children. “It is very important to use the TSP, and you can still add some ‘Keta School Boys’ or fish or eggs to the meal so that the children can enjoy”.

The Municipal Chief Executive (MCE) for Sissala East in the Upper West Region, Mr Karim Nanyua revealed thatsoybean production is the main occupation of about 95% of the inhabitants in the area, but the lack of ready market for the produce remains a major setback to them [farmers].

According to the MCE, the only time the farmers get buyers or market for their produce was when traders from Burkina Faso came to buy a small quantity from them, which he noted, had discouraged most of the farmers from investing in it in recent times.

He therefore commended GSFP for restoring hopes by creating a big market for local soybean farmers in the municipality and the five regions of the north at large.

The MCE was overwhelmed after he was introduced to some of the meals including banku, waakye, local rice jollof and TZ prepared with texturized soy protein. Mr. Nanyua expressed confidence that the introduction of the soy to the caterers would empower the local farmers economically.

The Programme Officer in charge of Agriculture at the GSFP, Mr. Seth Offei said his unit will ensure that the soybean farmers in the Sissala East and for that matter the entire region are linked with YEDENT Agro Processing Company for the supply of raw materials.

He said YEDENT has about six aggregators working around the Savannah and Northern Regions, which makes it easier for the farmers in Sissala East and Upper West region to be linked up.

Mr. Offei explained that the GSFP is encouraging the use of soy products which can be found locally because caterers over the years have complained about the small amount of money (GHC1.00) allocated to them for food preparation. But that, he indicated, does not mean the caterers should not add meat or fish to the meal even when they are available and affordable.

“Our main challenge is that the caterers have said that the money we give them are not enough and we are also very strict that they should provide them [the pupils] with balanced diet; so we have to look for alternative sources that are local; sources that available in people’s own homes and communities, so that with the little that we give them they can still give the best to the children. So, NO we are not asking caterers to stop using fish and meat”, Mr Seth Offei further explained. 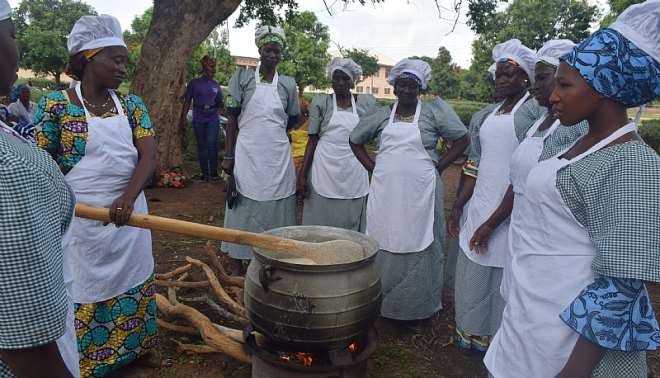