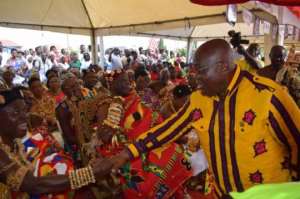 President Akufo-Addo has called on Ghanaians and the African community to leverage on the PANAFEST/Emancipation Day celebrations and the “Year of Return” to strengthen the bonds of solidarity with the new world.

He said the events, which are a chronicle of the most barbaric episodes in human history, were worth commemorating because they prove the strengths and resilience of African culture and achievements of Africans irrespective of the transatlantic slave trade and its aftermath.

Addressing a grand durbar of chiefs and people of the Central Region to officially open the 2019 PANAFEST/Emancipation Day celebrations in Cape Coast on Saturday, the President called on African people to make a resolution to never allow themselves to be subjected to such inhuman treatment again.

This year’s celebration is being held under the theme, “Uniting the Africa Family” with “Beyond 400 years: reaching across continents into the future” is the sub-theme.

The event was a master show of culture, custom and the best of African tradition as paramount chiefs in the Region rode in beautifully crafted palanquines and adorned in rich traditional regalia as they embarked on a royal procession from Abura to the durbar grounds at the New Cape Coast Sports Stadium.

PANAFEST was mooted in the mid-1980s as a cultural vehicle to bring Africans both home and abroad to work together to overcome barriers that sought to impede the growth of the continent and its people.

Similarly, the commemoration of the Emancipation Day was introduced in Ghana in 1998 and celebrated on August 1, every year, to mark the abolishment of chattel slavery in the Caribbean and beyond.

President Akufo Addo called on people of African descent to demonstrate continued commitment to the course of Pan-Africanism, adding that the celebrations offered an ideal platform to re-state clearly the destiny of all black people.

Mrs Babara Oteng-Gyasi, Minister of Tourism, Creative Arts and Culture, said the celebration of PANAFEST/ Emancipation must be a clarion call to all Africans and people of African descent to commit to the emancipation of the African continent from slavery and engage meaningfully in the development of the continent.

She said PANAFEST has over the years evolved into a cultural event that promoted unity, Pan Africanism and development in Ghana and Africa as a whole.

Mrs Oteng-Gyasi said the celebrations presented an opportunity for Africans in the Diaspora to trace their roots to their motherland using Ghana as a gateway.

She said government is committed to the development of tourism sector adding that, the Ministry’s resolve to develop Ghana’s rich and diverse tourism, arts and culture products hinged on the fact that tourism potentials, if well harnessed could be the catalyst for rapid transformation of the Ghanaian economy.

She called on all stakeholders including MMDAs, traditional authorities, media and the private sector to partner the Ministry and its allied agencies to support PANAFEST/ Emancipation Day celebrations.

Mrs Oteng-Gyasi urged Africans from the Diaspora to use the occasion as a springboard to explore business opportunities within the country.

Professor Esi Sutherland-Addy, Chairperson of the PANAFEST Foundation Board of Trustees, underscored the need to grow the ownership and participation of the communities that the celebration served.

She also called on government and all stakeholders to continue providing the needed support for PANAFEST/ Emancipation Day celebration activities.

Dasebre Kwebu Ewusi VII, Omanhen of Abeadze Dominase and Vice President of the National House of Chiefs, called on Africans to look beyond and build fruitful synergies for more sustainable development of the continent.

He urged the Ghana Tourism Authority (GTA) to take advantage of the Year of Return to turn Ghana’s tourism fortunes into an economic gain.

Nana Amba Eyiaba I, Queen Mother of Efutu and Kontihenmaa of Oguaa Traditional Area, performed the symbolic rites of a new beginning to usher the brothers and sisters from the Diaspora into the Ghanaian community.