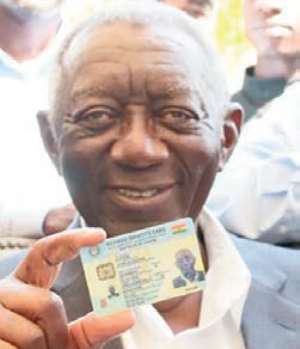 Former President John Agyekum Kufuor has stated that the media erroneously reported that he endorsed the stance of opposition National Democratic Congress (NDC) that the National Identification Authority (NIA) should make the Voters’ID a prerequisite for registering for the Ghana Card.

“The former president wishes to make it known that all that he called for was for all Ghanaians to take part in the exercise, and that if any group feels that the processes are defective, they should take part and protest from within in due course,” a statement issued in Accra yesterday and signed by Dr. Kwabena Osei-Adubofour, a senior aide and spokesman to former President John Kufuor said.

Erroneous Reportage
He said the media erroneously reported that he had endorsed the use of Voters’ ID cards in lieu of the primary identity documents of Ghanaian passports and birth certificates to attest Ghanaian citizenship for the purpose of registering for the Ghana Card which would be issued by the National Identification Authority (NIA).

Mr. Kufuor received his Ghana Card last Tuesday from the NIA officials and after his registration he allegedly asked the authority to consider the use of Voters’ ID Card as part of the process.

NIA Statement
The NIA immediately issued a statement to reiterate its decision to use only passports or birth certificates and two people to vouch for applicants at no cost for the ongoing exercise.

“The NIA takes note of ex-President Kufuor’s comment on the exclusion of the Voter’s ID card as one of the identity documents required by an applicant for registration for the Ghana Card, a statement from the Corporate Affairs Department of the authority said.

“The NIA, as a creature of statute, will continue to be governed by, and respect, the existing laws passed by Parliament.”

No Intention
“In exercising its statutory mandate, the NIA is determined to ensure that every Ghanaian at home and abroad is duly registered and issued with the Ghana Card, while at the same time doing all in its power to protect the boundaries of Ghanaian citizenship and the accuracy and integrity of the National Identity Register as by law required,” it said, adding “indeed, as NIA has pointed out time and again, those Ghanaians who lack any of the prescribed identity documents can be registered by being vouched for in accordance with the law at no cost to them.”

Heated Argument
The ex-President’s purported comments on Voter’s ID generated heated political argument which compelled his office to issue the statement to set the records straight.

“Former President Kufuor would want to make it abundantly clear that he does not in any way call for the substitution of a voters’ ID card for either a Ghanaian passport or a birth certificate in establishing Ghanaian identity in order to register for an NIA Ghana card,” it said.

“He does not under any circumstances impugn the authority of the NIA to determine the basis of one’s proving one’s citizenship to register for the Ghana Card, as he is satisfied that the NIA is doing so in accordance with the enabling legislation passed by the sovereign parliament of Ghana,” the statement added.

Legal Definition
“The legal definition of who is a Ghanaian is not a matter of politics and people should desist from making it so,” adding “in any case, it should be noted that the NIA enabling law was unanimously passed and it obtained a bi-partisan praise from Ghana’s parliamentarians.”

“What is reassuring is that the NIA law has two key processes by which those who do not possess either of the two primary citizenship documents can vouch for their Ghanaian citizenship. And they are that: a relative of an applicant can vouch for the applicant before a Commissioner of Oaths who will be part of the registration set-up.”

He added “where the applicant has no known relative, two persons who know the applicant can vouch for him/her before a Commissioner of Oaths.”

“The former President’s point is that the parliament of Ghana that passed the enabling law for the exercise must have considered the reality that the landmark ruling of the Supreme Court of Ghana in the Abu Ramadan case in 2016 required the voters’ register to be cleansed.”

LMVC Angle
Pressure group Let My Vote Count Alliance (LMVCA) encouraged NIA to remain resolute and dismiss calls to include Voters’ ID card as one of the prerequisites for the registration.

“We are of the firm conviction that the inclusion of the Voters’ ID card in the Ghana Card registration will distort the data, further deepen the cracks in the entire national identification system and compromise the authenticity of the whole process,” the group said in a statement.

“The electoral register has a lot of unresolved anomalies. It is for this reason that the LMVCA rallied behind and offered our full support to the plaintiffs in the Abu Ramadan & Evans Nimako v Attorney General case in which the plaintiffs argued that the use of the NHIS Card for voter registration was unconstitutional, as the NHIS Card merely indicates a minimum of six months of residence in Ghana, and not Ghanaian citizenship as stipulated by the constitution.”