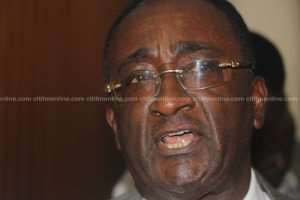 Dr Owusu Afriyie Akoto, the Minister of Food and Agriculture, has inaugurated a GH¢43 million dam for the Komokli Community, a farming village near Oterkporlu in the Yilo Krobo Municipality of the Eastern Region.

The dam is expected to irrigate over 60 hectares of farmland in the community to improve the yields of crops grown there.

The Minister, as part of his two-day working visit to the Region, handed over pumping machines for the dam and over 50 bags of organic fertiliser to the farmers.

Later at a durbar at Obawale, the Minister announced that the sale of subsidised fertiliser, under the Planting for Food and Jobs (PFJ), would end on December 31 and urged fertiliser distributors who have exceeded their targets to contact the Ministry’s extension officers for supply.

He said the subsidy also covered Urea and not NPK alone and expressed excitement over the performance of the Eastern Region under the planting for food and job programme.

He said records indicate that the number of beneficiaries in the Region had increased from 17,000 in the first year to more than 54,000 farmers this year.

Dr Akoto said planting for food and job was targeting 500,000 farmers this year but his tour of six regions showed that the project had already achieved the target adding that he was yet to visit Western, Central, Greater Accra and the Volta regions.

Dr Akoto said the Government would soon receive large consignments of agriculture machinery for small-scale farmers from Brazil and India to enhance food production in the country.