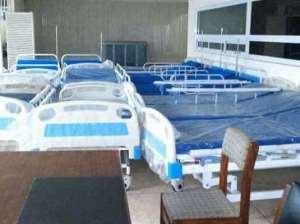 The delivered emergency beds at KBTH

The management of Korle-Bu Teaching Hospital (KBTH) has taken stock of new beds for its soon-to-be opened emergency centre.

The beds which were procured by KBTH’s management comes at a time when emergency care in the health facility has been stretched to its limits; leaving health officers with no choice than to treat patients on chairs and the floor.

The Public Relations Officer (PRO) of KBTH, Mustapha Salifu, who confirmed the delivery of the beds to DAILY GUIDE, said 36 beds have been delivered so far although the hospital has ordered for 236 beds.

“In all, we need 500 beds to replace broken down beds in other departments of the hospital,” he said.

It is envisaged that the delivery of the beds will improve emergency service in the health facility, especially with the opening of the hospital’s new emergency response centre in the future.

He said the contractors are currently painting the walls, setting up equipment and training staff, adding that while the new centre won’t erase all their problems, he is sure it would bring some relief to patients.

The KBTH made the news after relatives of patients who sent their sick relatives to the emergency and surgical units of the KBTH circulated pictures of patients being treated on chairs and the floor due to lack of beds.

The images went viral on social media exposing the dire situation under which patients are treated and raised questions about government’s measures in ending the ‘no-bed’ syndrome.

Although the Ghana Health Service (GHS) has directed health facility managers across the country to, under no circumstance, refuse to admit patients because there is no available bed, referral hospitals like the KBTH are often choked with non-emergency cases making the treatment of urgent cases difficult.