Students of the University Hall (Katanga), on July 19, filed a suit at the high court in Kumasi seeking to restrain the authorities of the Kwame Nkrumah University of Science and Technology (KNUST) from converting the all-male hall of residence to a mixed gender one.

This follows an announcement by the university authorities in February that it would be converting Katanga and Unity Hall (Conti) into mixed-gender halls, with the long-term goal of giving 50 per cent of the space to female students. It appears all diplomatic efforts by students and alumni of Katanga to influence the authorities to reverse course have failed, forcing them to escalate to their next line of action.

The university argues that the conversion will increase female enrollment in Science, Technology, Engineering, and Mathematics education as well as increase the female population in the school. The university also claims to be addressing security concerns after a spate of armed robberies and violent attacks on students in off-campus accommodations. 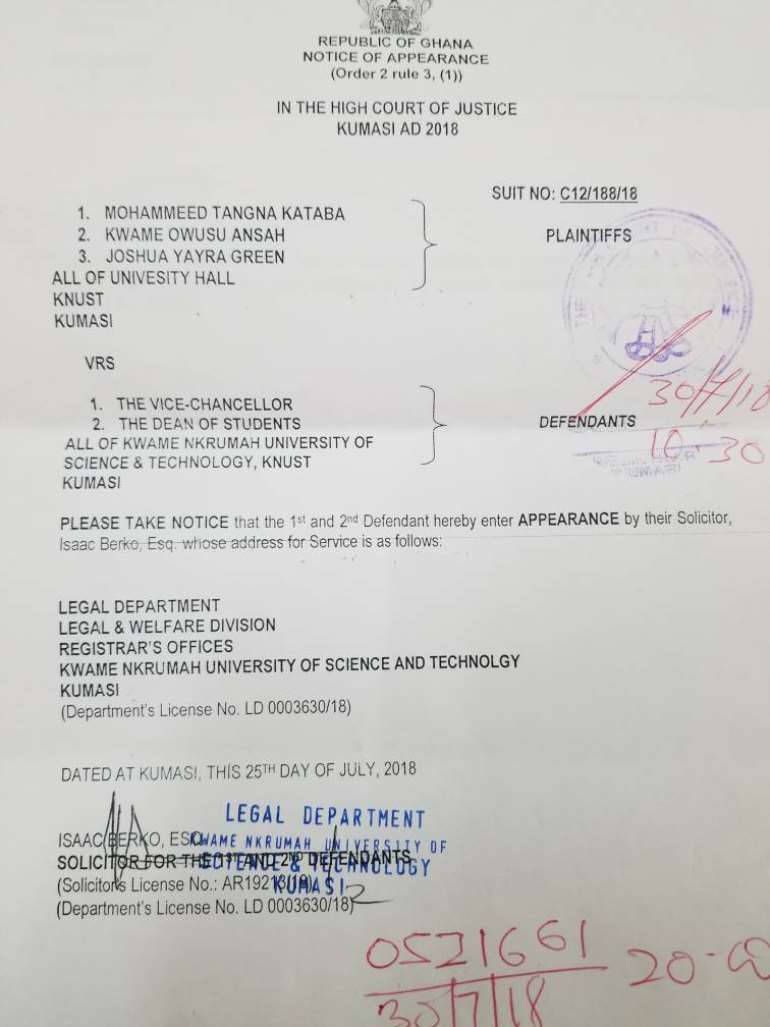 However, students and alumni of Katanga argue that the decision is a dubious and discriminatory attempt to minimize Katanga’s influence as the voice of resistance against injustice and oppression on campus.

In the lawsuit, three student leaders of the Katanga Junior Common Room claim that the university’s decision is suppressive, arbitrary, discriminatory, and unlawful and should not be allowed to stand, on the basis of the following:

i. The university’s attempt to assign 43 female continuing students to Katanga, per its letter of June 25, goes against the current university policy that no continuing student (male or female) is to be accommodated in traditional halls of residence, with the exception of duly elected hall executives.

iii. The attempt to displace male students in favour of females is discriminatory.

The alumni of Katanga have thrown their full support behind the lawsuit. Mr. Alfred Larnyoh, president of the UK Katanga alumni says the decision is a ridiculous and shameful display of a long-held disdain for Katanga.

Mr. Larnyoh adds that while stakeholders of the hall are open to a discussion about whether or not (and how) females may be admitted to Katanga, it cannot do so within the current context of the university’s high-handed and arbitrary approach.

On his part, Mr. Sam Sackey, President of North America Katanga alumni association adds that it’s secret that the real intent behind converting Katanga into a mixed hall has nothing to do with the reasons the university has put out.

He recalled that in 2014, the then Vice-Chancellor Otoo Ellis threatened to convert Katanga and Conti into a mixed-gender hall if “students [from those halls] break any more rules of the university”. He further indicated that several other authorities in the past have made similar attempts, and this is just one more go at the sinister plot.

Mr. Anthony Avege of the Ghana alumni association says that it does not take a rocket scientist to realize that the so-called solution that is being proposed does nothing to address the long-standing accommodation and security problems on campus in a sustainable way.

Nana Otu Turkson, of the Bermuda Katanga alumni association, furiously added that the lazy minds that have done nothing to mitigate the accommodation and security problems on campus cannot be allowed to create new problems with such poorly thought-through actions.

Asked what further actions alumni planned to take, Mr. Victor Wutor, president of the Canada Katanga alumni would only offer three short statements – “Katanga, the hall of gentlemen”; “rest not”; and “anything can happen”. Anybody who is familiar with Katanga would know that these statements are fundamental to the very nature on the hall and are duly enshrined in the hall’s anthem, motto, and slogans.

The first hearing of the case is expected soon.