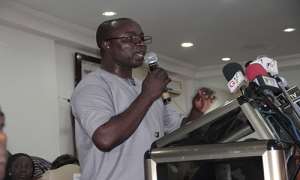 The MCE of Kumasi Metropolitan Assembly (KMA) Hon. Osei Assibey Antwi has reechoed the message of consumption and patronising of Ghanaians foods to ensure that farm produce are not wasted when they are in abundance.

He said that will address challenges of post-harvest loses, a situation where farms produce are left to go waste due to unavailability of market and warehouses to keep the leftovers and also boost the local industry

He said this during a joint 34th Farmers Day celebration held by the KMA and Oforikrom Municipal Assembly (OMA) at Ohwim on Friday, December 7, 2018.

The awardees, twenty from KMA and five from OMA, were presented with certificates, mattresses, cutlass, agrochemicals, spraying machines, watering cans, soaps and bicycles.

Speaking on the theme ‘Agriculture: Moving Ghana Beyond Aid’, the Kumasi Mayor said “we should eat what our local farmers produce, they are healthy and nutritious than the foreign ones.As patronise them, it encourages the farmers to produce more and that sustain the agric sector which is the backbone of the Ghanaian economy”.

On the post-harvest lose challenge facing the farmers, Hon. Assibey Antwi assured the farmers that the one district one one factory policy adopted by the government is meant to address that as the produce will be used as raw materials for the factories.

“Apart from the 1D1F policy, the government has started providing warehouses across the country to store excess farm produce to avoid been wasted. This year has seen the tremendous bumper harvest, all due to good measures put in place by the government, like the subsidised fertilizers, prescribed seedlings, training of extension officers to help the farmers,” he boasted.

The 60-year-old man took away a bicycle, mattress, bag of fertilizer, boots, spraying machine and a fertificate.

In his remarks, he appealed to the government to address the issue of high rate of interest on loans secured at the financial institutions as it impedes the expansions of their farms.