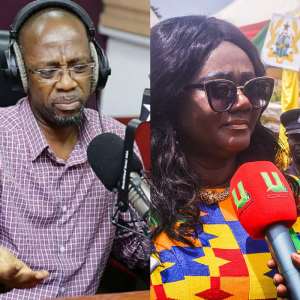 Last Friday, March 1, 2019, the President removed Madam Afeku from office in a surprise reshuffle, replacing her with Madam Barbara Oteng-Gyasi, who was the Deputy Minister for Lands and Natural Resources.

And even before she is vetted to take office, players in the industry were already putting in their two cents on what they expect from her.

Some of the stakeholders in Showbiz are speaking and according to them, they expect the incoming minister to be proactive and not to further engage in talkshops.

Highlife artiste, Rex Omar, who is also the Chairman of the Ghana Music Rights Organisation (GHAMRO), said the NPP made a lot of promises during the 2016 elections.

According to him, Madam Barbara Oteng Gyasi must lead the way in fulfilling them.

“I hope she will do something better and different which I doubt anyway because government reshuffling ministers don’t really change anything. The real change starts with the executive and what they really want to do.

“All I want to see is that they implement what they promised like the Creative Arts Fund, the Copyright Court which I think the former Minister started working on but most importantly, they should build the theatres they promised. At least, they should be able to build one in Kumasi before 2020 elections,” he said.

His position was supported by artiste manager and CEO of Media Excel, Kwesi Ernest, who said he had had enough of English language lessons from the former Minister, Madam Catherine Afeku, and expected more work to be done by the current minister.

“My expectations are very simple because I want an action-oriented approach to facilitate passage of the Creative Arts Bill, Film Bill and any other bill required for the growth of the creative arts industry.

“Again, she should help to quickly facilitate the establishment of the Creative Arts Fund to allow stakeholders access funding for operations to re-energise the sector. Currently, the sector is down due to financial problems which is not helping the initiation of good projects.

“So obviously, this is not the time for plenty English because we’ve had enough of English Language lessons from Catherine Afeku and we don’t need more. It should just be action, action and action,” he stated.

With a myriad of problems bedevilling the creative arts industry, renowned Sound Engineer, Fred Kyei Mensah, popularly known as Fredyma, said it would be important for the incoming minister to have a meeting with stakeholders to outline her plans and vision for the industry.

“The new minister should be well briefed by the outgoing minister to tap into her experience. She should be able to identify the loopholes, the income generating areas, new territories, and seek advice from industry professionals like some of us.

“She should take steps to immediately upgrade the already existing tourist sites, which are dilapidated, to modern standards. Tourism, cultural and arts clubs in our various institutions should be promoted.

“She should urge the government to enforce the entertainment policy on hotel establishments in the country as well as constant training for hotel staff and managers,” he stated.

Former Public Relations Officer of the Film Producers Association of Ghana (FIPAG), Ola Michael said, there was limited time for the new minister to initiate other policies and entreated her to just implement the good ideas already in place.

“The NPP government has less than two years and it wouldn’t be ideal to make changes that would invite a new beginning. She should also allow Ghana Tourism Authority (GTA) to function and pay particular attention to the culture and creative industries,” he said.