This milestone event was held to honour positive male role models in our society and also engage the boys on issues affecting their well-being in honour of this year’s International Men’s Day which falls on Monday, 19th November, 2018. The theme for this year is “Positive Male Role Models” and is targeted towards improving gender relations, promoting gender equality, and highlighting positive male role models in society.

In her opening address, Founding Director at JSA, Mrs. Ethel A. Marfo laid emphasis on the need to raise awareness about the neglected issues affecting men and boys in society while also finding solutions to improve the overall well-being and upbringing of our future men in Africa. She also led a panel discussion with a group of the boys on certain pertinent issues. The boys spoke about the values they stood for and uphold, why they believed in those values and what influenced them to do so. Some of the boys also spoke about their sexual and mental health and how they react when faced with certain sensitive situations. She went on further to advice the boys to voice out and seek for counselling in order to get help for the issues affecting them.

Rev. Claude Mann of FatherServe Africa, a male youth and responsible fatherhood advocate also spoke to the boys on values, responsibilities and character development. He advised the boys to accept and know who they and to developed the right character to shape their future endeavours.

After the discussion by Rev. Claude Mann, there was a dance break session whereby some students of the school entertained the audience with an energetic dance session.

Founding Director at JSA, Mrs. Ethel A. Marfo made a presentation of citations to the JSA Men of the Year. Citations were presented to Sports Journalist Ekow Asmah who was honoured for his stance on punctuality at the GFA Normalization Committee sitting, Rev. Claude Mann of FatherServe Africa, for his male youth and responsible fatherhood advocacy, Amos Kevin-Annan for his contribution towards the personal development of the youth as a life coach and counselor, Foster K. Adzraku for his efforts at the Ministry of Gender, Children and Social Protection to promote gender equality and end child marriage in Ghana, Eugene Asiedu Dartey, the Head Boy of Achimota School for his leadership abilities and positive influence on the boys in his school, and to the West Africa Network for Peacebuilding (WANEP) for their contribution towards peace building in society and for supporting JSA organize this event.

Mr. Foster K. Adzraku from the Ministry of Gender, Children and Social Protection in his solidarity message also redefined the meaning of gender roles to the boys and highlighted the need to live in peaceful coexistence with women. He also spoke about some of the abuse in society being perpetrated mostly by men including child marriage. According to him 260,000 girls aged between 20-24 years currently were married before the age of 18. He advised the boys to refrain from abuse in order not to stain their reputation in future but rather they should respect the choices and value of girls.

Next on the bill was the address from the keynote speaker for the occasion Amos Kevin-Annan, a life coach and youth personal development counselor. In his address, he spoke to the boys about Personality Conflict; knowing who you are, where you are going and what you stand for. He also advised them to identify and prioritize their essentials from the non-essentials at their current stage in life. He advised them to create friendships with girls and to desist from intimate relationships now as that was a non-essential and could wait.

There was also a surprise guest in the person of Ace Musician Kwame Nsiah-Apau popularly known as Okyeame Kwame. He engaged the boys on self-awareness and challenged them to find their purpose in life in order to share it with others. He also spoke about leadership, emphasizing that the time to lead is now and advised the boys to show leadership and lead their friends and peers to always do the right things in society. He was also honoured with a citation for his accomplishments in music, humanitarian efforts to solve societal problems and for promoting our cultural heritage through his “Made in Ghana” initiative.

Boys from Accra Academy Senior High School were also present and they shared their thoughts on how to be a responsible man. According to them, identifying your friends and avoiding peer group influence as well as time management and value acquisition were some of the key factors in shaping one to become responsible.

Mr Edward Jombla, a representative from the West Africa Network for Peacebuilding (WANEP) was also present to deliver a solidarity message on peace building. He spoke about the need to do away with stereotypes such as gender stereotypes, ethnic stereotypes etc. to maintain the peace in our country. He also advised that we live in peace and harmony with women and girls in our society and to never engage in violence against women. According to him, Men and boys of quality are not afraid of equality.

Delivering the vote of thanks, the Head Boy of Achimota Senior High School on behalf of his students thanked JSA for bringing such an initiative to their school and called for more of such initiatives to help identify and address the issues facing boys and to recognize and applaud the good works of responsible men in society.

Afterwards the closing prayer was said by one of the students to bring a successful end to the JSA International Men’s Day 2018 commemoration.

Special thanks to Achimota Senior High School for hosting the program, to the speakers for their insight and to WANEP, Ministry of Gender, Petrosol, Atlas Rent-A-Car, Food 101 and Okyeame Kwame. 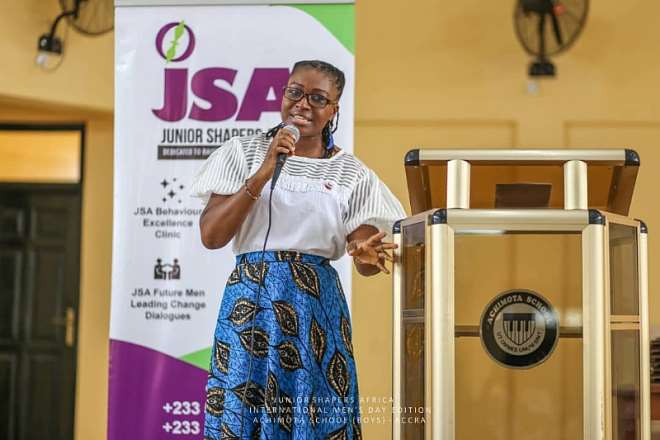 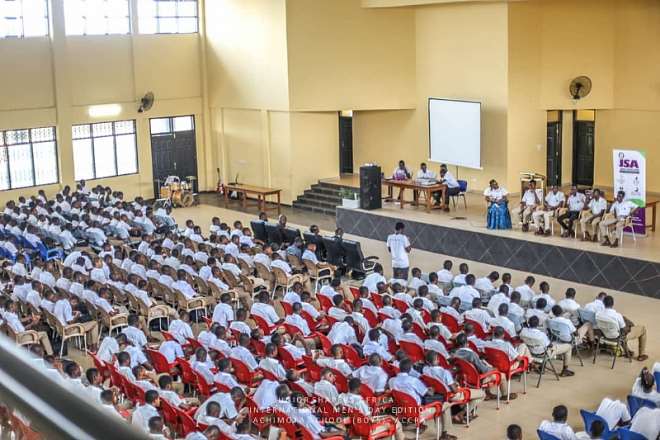 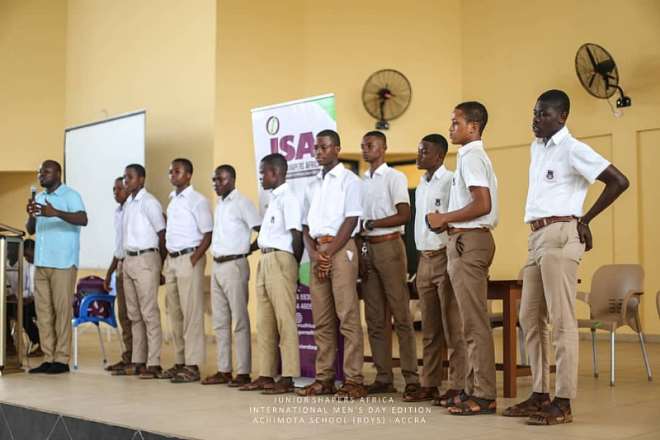 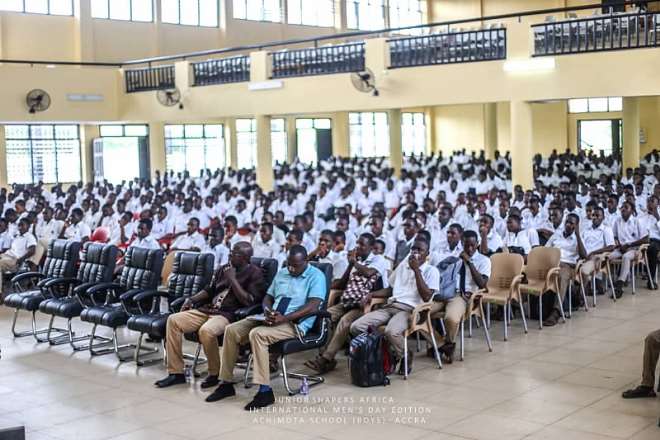 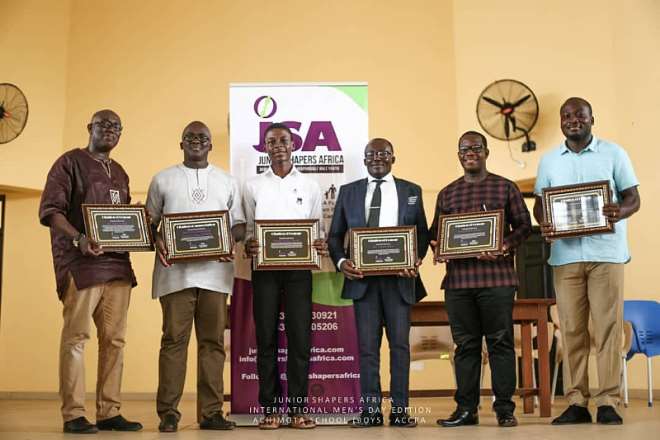 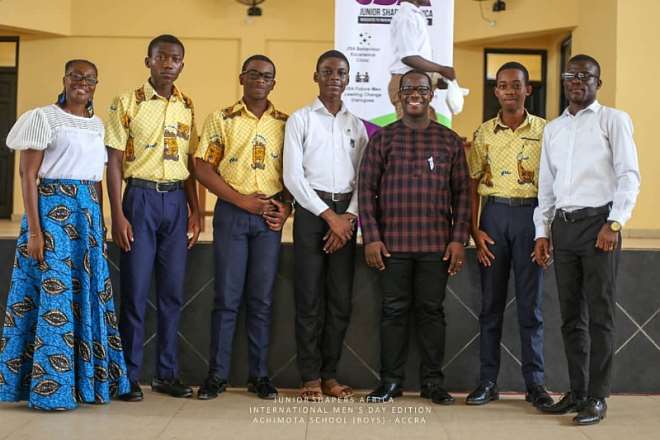 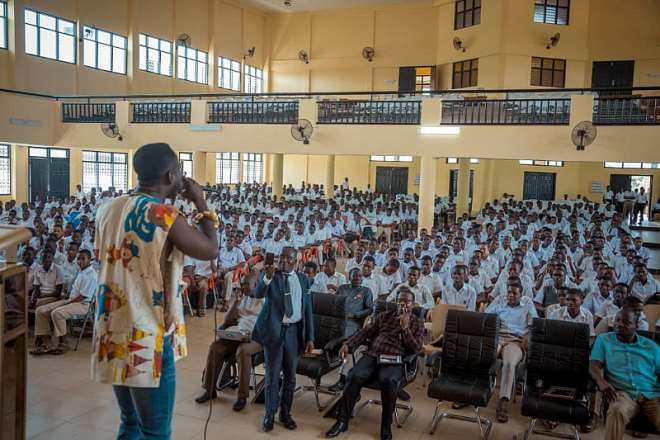 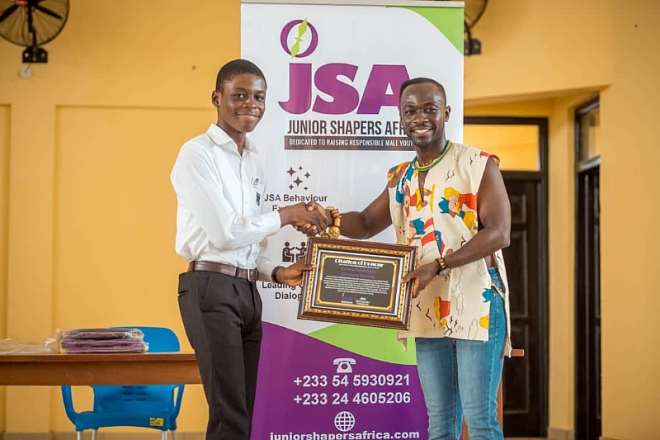 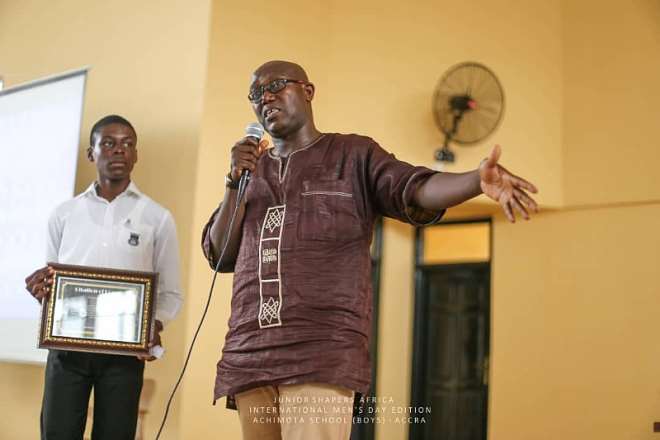