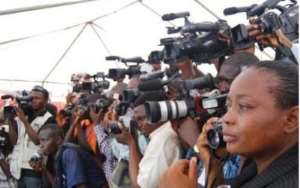 A reporter of Tamale based Diamond FM has survived some real beatings in the hands of some supporters of the New Patriotic Party (NPP).

The angry political hoodlums claim he allegedly took pictures of a constituency executive who collapsed at the ongoing NPP primaries at the Sagnarigu Constituency.

Ms Sangkpi Sabina is said to have been slapped multiple times and dragged on the ground by the aggrieved supporters.

She was subsequently forced out of the venue by the supporters.

The Sagnarigu Constituency chairman collapsed when he was walking out of the venue with some supporters of the party. It is not known what might have caused his collapse.