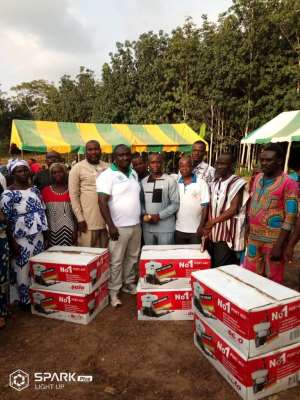 The Member of Parliament for Jomoro Constituency in the Western Region, Hon. Paul Essien popularly known as ‘Jomoro David’ has donated six knapsack spraying machines worth 15,000 Ghana Cedis to cocoa farmers in some cocoa growing communities.

50 bags of cement were donated to the communities to be used as a foundation.

Making the donation over the weekend at Tweako No.1, Hon. Paul Essien said his donation was in the fulfillment of his electioneering promise to support farming in the constituency and the financial strength to improve their standard of living.

The MP who is also the Deputy Minister for Chieftaincy and Religious Affairs described the cocoa sector as the backbone of the economy and enumerated its tremendous contribution towards infrastructural development of the country.

He further stressed government’s initiative of “Planting for Food and Jobs” which is creating employment for the youth in the communities.

With the re-introduction of the pollination and gang spraying program, he assures the farmers of equal benefits towards boosting cocoa production.

He urged farmers to observe all the requisite practices to enable them reap the benefits of their work to improve their livelihoods.

The MP advised the beneficiary communities to manage the machines properly and adopt periodical maintenance structure”.

He also advised the farmers to always get their chemicals from the approved source and agents so as not to use the wrong chemicals which can destroy their cocoa seedlings.

Hon. Paul Essien pledged to construct a CHP compound for the communities to provide good healthcare for the residents.

He called on them to rally behind President Akufo-Addo and the NPP government to develop the country.

“I call on you to rally behind President Akufo-Addo because through the help of President Akufo-Addo, some youth of Jomoro have been engaged as Cocoa Pollinators and at least these people their living standards have changed and more opportunities are underway”, he emphasized.

Some of the farmers who spoke to the media after the donation, thanked the MP for the kind gesture and asked for more of such assistance to live meaningful lives.

The MP was accompanied by the Jomoro Municipal Agricultural Officer, some extension officers, some NPP Executive Members who was led by its Chairman, Mr. Simon Amoah, the media among others.