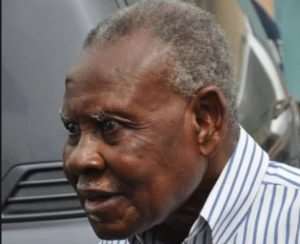 The late Statesman and NPP stalwart, Joseph Henry Mensah will be laid to rest tomorrow Friday at the new military cemetery.

J.H. Mensah who died a month ago at the 37 Military Hospital was 89 years old.

A statement signed by the General Secretary of the governing New Patriotic Party (NPP), John Boadu said there would be a church service at the Christ the King Parish this evening at 6 pm.

The body, according to the statement, will subsequently be laid in State at the Accra International Conference Centre at 6 am on Friday.

This will be followed by a Memorial Service later in the day. President Akufo-Addo, Vice President Bawumia, Former Presidents, Rawlings, Kufuor, and Mahama, as well as Members of the Diplomatic Corps, are expected to pay their last respects on Friday.

He was also the Senior Minister under President John Kufuor decades later in 2001.

J.H. Mensah’s life in politics began in 1953 when worked as an assistant inspector of taxes.

In 1958, he joined the United Nations Secretariat at the Centre for Development Planning, Projections and Policies. 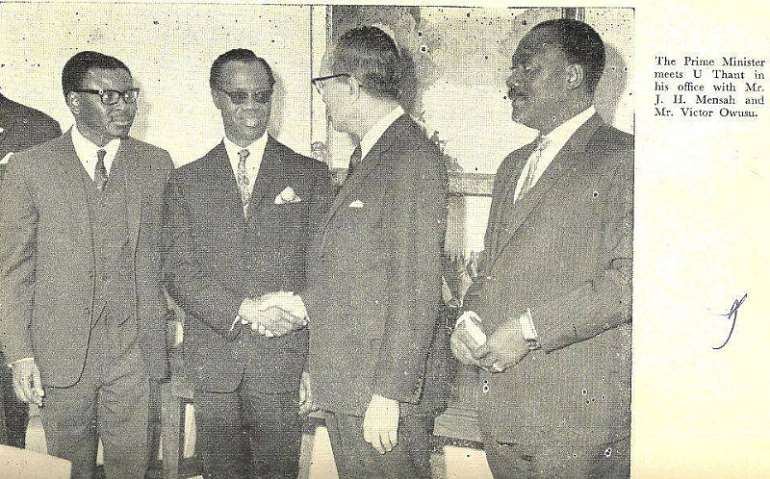 Under his leadership, the National Planning commission drew up and implemented the Seven-Year Development Plan from 1962 to 1969.

In 1969, he was elected to Parliament and became the Minister of Finance until 1972.

After Acheampong’s 1972 coup, J.H. Mensah was imprisoned under the National Redemption Council (NRC) in 1975.

He was later forced into exile in the early 1980s but still headed a group opposed to the Provisional National Defence Council (PNDC) led by Flt. Lt. Jerry John Rawlings. J.H. Mensah with Nana Akufo-Addo after the NPP’s victorious election 2016

After Ghana entered its Fourth Republic, in 1992, he served on the African Advisory Council of the African Development Bank from 1993 to 1997.

In December 1996, J.H. Mensah successfully contested for a parliamentary seat in Sunyani East District on the ticket of the NPP and served as the Minority Leader in Parliament.

He was re-elected in 2000 when the NPP assumed the mantle of governance after over three decades in opposition.

J.H. Mensah was born to a father who was in the Gold Coast Civil Service and a mother who was a trader at the Kumasi Central Market.

He was the third of 10 children.
He attended St Peter’s Cathedral School, in Kumasi and Achimota School after that.

After Achimota School, J.H. Mensah went to the University of Gold Coast, where he studied economics.

He is on record as the first President of the Junior Common Room of the Legon Hall.