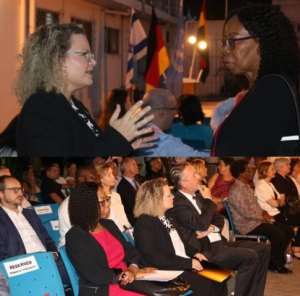 The Ambassador of the State of Israel, Madam Shani Cooper says the Council of Ministers of the European Union has adopted an important resolution combating antisemitism and improving security for Jewish communities in Europe.

She noted that the resolution had a specific reference to the problem of severe on-line anti-Semitic hate speech and holocaust denial.

She recounted that the resolution also called on member states that are yet to endorse the International Holocaust Remembrance Alliance working definition of anti-Semitism, to do so.

Madam Cooper made these remarks in her speech alongside the screening of a film titled: ‘Numbered,’ as part of activities commemorating the International Holocaust Remembrance Day in Accra.

This year’s theme: ‘Holocaust Remembrance: Demand and Defend Your Human Rights,’ highlights the 70th Anniversary of the Universal Declaration of Human Rights and the Convention on the Prevention and Punishment of the Crime of Genocide.

Holocaust was a genocide during the Second World War in which Nazi Germany, aided by its collaborators, systematically murdered some six million European Jews, around two-thirds of the Jewish population of Europe, between 1941 and 1945.

Madam Cooper noted that on such memorable days she reminds herself that that would not happen again, adding: ‘We have a State now, it is flourishing, but the fear from racism and antisemitism still exists, because in our world, antisemitism and racism still exists’.

She noted it was a responsibility for all to work for the elimination of Anti-Semitism and racism adding; ‘We will never be able to change the past, but together, we could change the present.’

Mr Christoph Retzlaff, German Ambassador to Ghana, said what happened at Auschwitz was a fundamental attack on human dignity; a fanatical and criminal ideology which denied people their humanity.

He said their commitment was firmly rooted in freedom and the rule of law, pluralism and tolerance, however, those values were as fragile as they were precious.

‘They require our constant vigilance and our committed effort to begin with, this means exposing old and new prejudices and stereotypes for what they are,’ he added.

She said from a deadly assault on a synagogue in the United States to the desecration of Jewish cemeteries in Europe, this centuries-old hatred was not only still strong but getting worse.

‘We see bigotry moving at lightning speed across the internet; as the Second World War recedes in time, and the number of Holocaust survivors dwindles, it falls on us to be ever vigilant’, she added.

Ms Welch said there was indeed intolerance entering mainstream politics; targeting minorities, Muslims, migrants and refugees, and exploiting the anger and anxiety of a changing world.

The UNDP Country Representative, therefore, underscored the need to unite in the fight for universal values, and build a world of equality for all.

Auschwitz prisoners, both Jewish and non-Jewish, were tattooed with serial numbers, first on their chests and then their left arms. An estimated 400,000 were tattooed in Auschwitz and its sub-camps; only some several thousand survivors are still alive today.

The film, ‘Numbered’ is an explosive, highly visual, and emotionally cinematic journey, guided by testimonies and portraits of the survivors.

It documents the dark times and settings during which those tattoos were assigned as well as the meaning they took on in the years following the war.