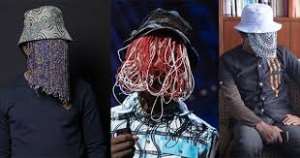 The 40-day celebration of his mother’s death passed without the presence of Anas Aremeyaw Anas. While it was speculated that it was due to security reasons, the confessions of a friend seem to suggest another reason why the ace investigator could not be present at his own mother’s funeral.

“We are not to be at the funerals of our relatives nor behold their corpses”, Michael Owoo, a close friend of Anas Aremeyaw Anas said.

“We” are who? He only smiled and asked, “But are you, small boys?” Much as he sounded tipsy from drinking too much of the beer in front of him, he was clearly sound-minded and in full control of himself as well as articulate though his eyes looked glazed.

Speaking to a group of young folks that had gathered at the funeral grounds with the forlorn hope of seeing Anas himself, Michael explained that there are rules guiding them.

There was no way Anas could have attended his mom’s funeral. He could never have as it would have been a flagrant violation of their basic rules.

He recalled, “We were initiated with some Ghanaian celebrities who are junior members on the same day. This is why you will never see Anas and some of them together on one platform. Just watch and see. It is one of the Illuminati rules that those who were initiated on one day do not collaborate.”

“I clearly remember the day we were initiated,” he reminisced, “We were at the Institute of journalism then, when a friend who was already initiated introduced the idea to us, inviting us to their next meeting. Anas who seemed interested in everything spiritual was eager to join. I was at first afraid as I was not sure what I really wanted. Yet Anas’ interest gingered me on so three of us went that Saturday evening to the meeting which was held in a home at Airport.”

Obviously fueled the more by the beer and the avid interest of his listeners, Anas’ friend described their first meeting with the Illuminati as really scary as they were made to drink some concoctions which he found nauseating. Anas, he said, was brazenly braced for anything, so he did not flinch at any stage of the initiation process and drank all he was asked to.

“That guy is brave, “Mark stated. “ It was at the initiation that the name ‘Tiger’ was given to him. The Tiger Eye is an Illuminati name. Every Illuminati has a secret animal name. A Ghanaian musician was named Fox, another was named Dog and an actress, the peacock. This secret about Anas and the rest is known very well to the prophets Obinim, Owusu Bempah and Kumchacha” Mark asserted.

“For instance, they are not to eat mudfish, he revealed. The day they eat mudfish even by mistake, they would be demoted just like their predecessors had been.”