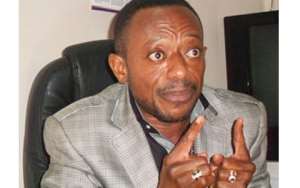 The Founder and Leader of Glorious Word Ministry’s, Prophet Owusu Bempah, has launched a barrage of attacks on the Editor-In-Chief of the New Crusading Guide Newspaper, Kweku Baako Junior for describing him among fake pastors in the country.

Kweku Baako Junior declared on radio his upcoming campaign to expose and thrash out all fake men of God who are causing fear and panic in the country with their doomsday prophecies.

According to the Senior Journalist, he was going to have a field day with some of the pastors and prophets he felt were being pampered by politicians for making a mockery of Christendom without mentioning specific names.

But Prophet Owusu Bempah with the nickname “The Nation’s Prophet” who did not take it likely because of his close association with President Akufo-Addo, has taken the fight upon himself to deal with the veteran journalist squarely.

The Prophet who was visibly upset in a video interview on (Nsem Pii) programme on UTV sighted by ModernGhana, reined insults on Kweku Baako for making insinuations directed at him and his association with politicians.

He openly declared his intentions to take on the journalist whom he accuses of meddling in issues which do not concern him.

Both Kwaku Baako and Owusu Bempah have cautioned politicians not to meddle in them when the fight begins.

The Prophet descended heavily on the political and social commentator for his advice to politicians to distance themselves.

“I used to like him a lot, but I didn’t know he was such a f….! Only for him to suggest that politicians should distance themselves from pastors and prophets. Satan like you Kweku Baako. It is only stupid pastors will come to you Kweku Baako,” he fumed.

The angry looking Prophet Owusu Bempah says he does not see anything wrong with him suggesting that the missing Takoradi kidnapped girls could be located if Ghanaians pray fervently.

“What wrong have I done by suggesting that the Takoradi girls could be located if fervent prayers are offered to that effect? Why didn’t Kweku Baako caution the one who said he would slap for making this suggestion. It appears that Kweku Baako has a problem with me.

“If Kweku Baako was the President of Ghana, he would sack all pastors from Ghana. That is why God has cursed him. If you are not stupid, why will you buy a car you cannot drive and park it in the house only for others to drive it for you? What I have said is a proverb and it is only intelligent people who will understand it,” he stressed.

Watch the video below: