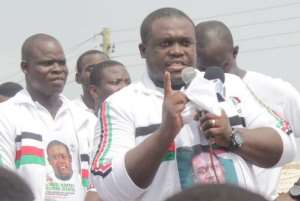 The Member of Parliament for Ningo Prampram Honorable Sam George has assured that the Minority in Parliament will haul the minister for Monitoring and Evaluation, Honorable Anthony Akoto Osei when Parliament reconvene.

Honorable Sam George who is also the Greater Accra Regional Secretary of the main opposition National Democratic Congress (NDC), strongly believes that Honorable Anthony Akoto Osei who has been given a supervisory role over National Identification Authority (NIA), does not qualify to be the minister for Monitoring and Evaluation as he does not possess any technical expertise to be able to work as such.

Parliament is currently in recess and will resume after 15th April 2018.

Sam George disclosed to Class FM that bringing the minister before parliament will allow them the chance to demand for an explanation from him as to why the Government has not been able to deliver on its promise to Ghanaians to issue the Ghana Card that will help identify Citizens of this country. He also said the Government’s inability to issue the Ghana Card till date is an indication of how the current administration has been going on a promising spree.

He continued, the Backbone of the NIA is infrastructure so instead of Government going on a promising spree they should rather shift their attention to fixing the infrastructural problem at the NIA.

Honorable Sam George who believes all the people with the technical expertise are at the Ministry of Communications explained, “even when you take the NIA bill for example, the backbone of the Identification Authority, the whole system is going to sit on infrastructure of the National IT agency, the National IT agency is under the ministry of communication, the National Communication Authority is playing a key role in the roll out of the Ghana ID card, the national communication authority is under the ministry of communication so I will love to see how the minister of Monitoring and evaluation will be able to answer technical questions and that is what we are going to explore when parliament reconvene”.