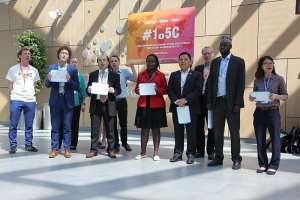 Green groups from Ghana and other African countries joined the UN-hosted Africa Climate Week to demand rapid and ambitious climate action by government officials gathered in Accra for the conference.

The conference is one of three regional climate workshops aimed at accelerating the implementation of current national climate plans – nationally Determined Contributions (NDCs) – and the definition of more ambitious ones ahead of the special summit called by UN Secretary general António Guterres in September, and the next United Nations climate change conference, COP25, to take place in Chile in December.

Despite the urgency of the climate crisis, rendered all the more evident by the damage caused by cyclone Idai in Southern Africa – which took the lives of hundreds and impacted an estimated 1.5 million in the entire region- leaders gathered at the Africa Climate Week are failing in making concrete steps forward in heeding the calls for ambitious climate action issued by climate scientists, citizens and activists alike.

“The impacts of global warming are being felt daily by millions of Africans all over the continent. Communities everywhere fear to lose their land and their houses as each season hits one country after the other with exceptional floods, unexpected storms and increasingly long droughts. And cyclone Idai is just another terrible manifestation of what the expansion of fossil fuels means for African people,” said Landry Ninteretse, Africa Team Leader at 350.org.

“The proliferation of fossil fuels projects is happening at the expense of people’s health, climate, and ecosystems. Yet, solutions to this crisis are also well known. They include ending coal extraction and mining in the very short term and stop funding new coal infrastructure, while accelerating investments in renewables.”

Ghana Reducing Our Carbon (GROC), 350 Africa and other civil society groups addressed leaders gathered at the Africa Climate Week to demand plans for a rapid phase-out of fossil fuels and an equally rapid and just transition to renewable energy sources, starting from Ghana’s commitment to produce 10% of its primary energy from renewable sources by 2030, which was already postponed from the initial 2020 deadline.

“Over the past four days we have heard representatives of African governments play little more than lip service to the need for ambitious climate action. They will go back to their capitals tomorrow and keep approving plans for new fossil fuel infrastructure, which is going to benefit only a handful of large corporations, some of which are foreign corporations, in Africa to once again exploit its resources and dump the resulting pollution on the most vulnerable and those who don’t have a say in these decisions” said Portia Adu Mensah, Coordinator of 350 – Ghana Reducing Our Carbon (GROC).

“Our continent needs a Copernican revolution, putting people’s lives before profits and achieving development by addressing the climate crisis: a rapid deployment of renewable energy sources and a focus on creating a truly green economy will lift people out of poverty, ensure that our energy needs are met and contribute to stopping the climate from changing even further in dramatic and deadly ways. Ghana can and must lead the way by setting in motion plans to meet its target of 10% primary energy produced by renewable energy sources by 2030”.

Already considered by the UN as possibly the worst cyclone ever to strike Southern Africa, Idai has ripped through villages and towns in three countries over the last few days, taking over 1000 lives and leaving a trail of destruction.

With winds of 195 km/h accompanied by lashing rains, Idai has already affected millions of people, causing floods, landslides and ruining crops and roads.