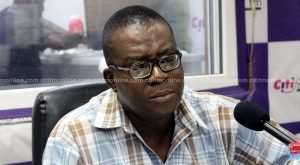 The President of the National Association of Graduate Teachers (NAGRAT) has said it is inappropriate and insensitive for the government to refer to customers of gold dealership company, Menzgold as greedy people.

Angel Carbonu is of the view that the government must blame itself for the woes of the numerous investors of the company who are unable to access their investments.

Speaking The Big Issue on Saturday, Mr. Carbonu said the principal duty of the government in the matter is to assist the customers to recover their locked up cash and not bastardize them for investing in the company.

“Workers believe that they voted for governments, and it is the general responsibility of the government to protect its citizens; that is why I am very disappointed if somebody refers to the victims as greedy. These words are not too kind words for people who are aggrieved, have lost monies and are already in despair… Let government stop these expressions of you are greedy and so on. They should not banter with the people,” he said.

The Minister for Finance, Ken Ofori Atta in November 2018 when it became clear that Menzgold will not be able to fulfill its financial obligation to its customers said that the government would not take up the responsibility of paying up the locked up investments of the customers.

The Minister said looking at the persons of various backgrounds who had invested in the company; he looked at the situation as an issue of greed.

“As we try to clean up the financial services center, I know the SEC has come down hard, strong and justifiably on Menzgold. But the issue with a company of Menzgold…it’s become an issue of greed as a people and our own behaviour, when we are so clear as educated as we might be that when we went there, there was no license,” the Minister said.

His statement generated a lot of backlash especially from the aggrieved customers who accused him and the government of staying aloof and watching the company to perpetuate the illegality.

Angel Carbonu who told host Selorm Adonoo that many graduate teachers also have their cash locked up with the company, said the government must take responsibility for the situation and act in the interest of the affected citizens.

“When a problem comes, it is the responsibility of the managers of state to do whatever is in their power to protect the citizens, not to find fault with the actions of the citizens. If something is operating within this country and people availed themselves to it, if they fall victim, you take action to protect them as early and aggressive as possible so even if they will not get all of their investments, they should get a substantial amount of it,” he said.

He however commended government for taking steps in the issuance of a warrant for the arrest of the CEO of Menzgold, Nana Appiah Mensah, who is alleged to be in hiding outside the country currently.

“I am very happy with the action [arrest warrant] taken by the government, but I think government could do more to ensure that the people get their money,” he added.