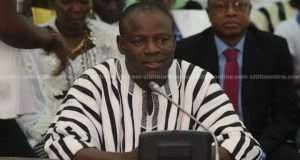 The Regional Security Council (REGSEC) is collaborating with the Interior Ministry to investigate circumstances that led to some military officers attacking some police officers and residents in the Northern Regional capital, Tamale.

The Northern Regional Minister, Salifu Saed who made this revelation on the Citi Breakfast Show said REGSEC had already begun deliberations to prevent a recurrence of these attacks.

“We proposed that the Ministry of Interior, Defence should come in and as I speak to you the delegation has already arrived, and we are moving to a common ground for the issue to be investigated so within 24 hours, a permanent and lasting solution will be found and restored.”

The soldiers went on rampage on Wednesday, following the arrest of their colleague who had attacked a taxi driver.

This is the third time such an incident has happened between the police and the military in the three regions of the North.

Meanwhile, Speaker of Parliament, Mike Oquaye has summoned Ministers of Defence and Interior over the clash that left some eight police officers injured.

Both Ministers were asked to appear before the house after joint advocacy by the Minority and Majority side of Parliament on the violent attacks.

The Minority Leader in raising the matter said the clashes had implications for the security of Tamale and the nation at large.

I do want to indulge you, Mr Speaker, that there is some ongoing insecurity in Tamale and for that matter in Ghana arising from the insistent, violent attacks between members of the military, the armed forces and the Ghana Police Service. Security remains a primary and secondary need for the peace and stability of the country. We have concerns about those reprisals.

“Indeed Mr Speaker, a first of it happened on March 26 in Tamale around the Agric Development Bank road. Mr Speaker, I am inviting you, so the Minister for Defence and the Minister for Interior will be obliged to come before this house and assure the public that we are safe and secure and in particular the people of Tamale have no reason to live in fear and panic.”

In response, Prof. Mike Oquaye issued a directive for the Ministers to appear next Tuesday, saying “the honourable Minister for Defence and Minister for Interior should appear before this honourable House next Tuesday and address the house on these developments and measures being taken to arrest and prevent same from ever occurring.”