The 71 beneficiaries were drawn from all the 78 Communities in the Gomoa West District with 34 of them receiving Deep Freezers, Electronic and Leg paddled Sewing Machines, Laptops, Electronic Printers and others upon request made to the Assembly to establish themselves

Apart from that 37 also received financial assistance ranging from Ghc 1,000.00 to 2,000.00 based on their request made to the Assembly to expand their businesses. Another 47 Disabled persons who have applied for Containers to start petty trading and other economic activities in their various communities will also be given what they have requested to support themselves accordingly

Addressing the beneficiaries at Apam, the Gomoa West District Chief Executive, Hon Bismark Baise Nkum noted that the Assembly decided to purchase the items to empower the beneficiaries to be Self-Sufficient so they can cater for their families.

Last year, we gave them similar items including a Corn Miller Machine to generate income. The Assembly has constructed a structure for the machine and connected with electricity to power the machine

Today’s presentation is to enable those who want to go into petty trading like selling of Ice Water, Small Cold Store to sell variety of fresh fish and meat, soft drinks and others.

In this respect, 25 people received a Deep Freezer each to generate income for financial sustainability

One of the Laptop was given to a Blind Spinner who have Spinning Machines which people hired for funerals, wedding, outdooring, festivals, and anniversary celebration, but because he does have a laptop to get them better sounds, people have declined his services.

Mr. Rawlings Onyinah, a native of Gomoa Nkoransa is one of the finest DJs in the Gomoa West District so we purchased the laptop to boost his business. There is another guy who operates a small stationery store so we have also supported him with a Printing Machine and a Laptop as well

Hon. Bismark Baise Nkum stated that monies meant for Persons With Disabilities would never be misused under his watch but would be disbursed judiciously to the beneficiaries upon their individual request to meet their needs.

Apart from these 71 people, the Assembly is also going to supply Store Containers to 47 Disabled persons who have applied for the facility to either start or expand their businesses. The Assembly will facilitate land permit for the Containers to be placed at their required locations

I will like to advise them to take proper care of the items given to them and also beware of the mismanagement of money. We have a large size of Persons With Disabilities in Gomoa West District who will be receiving these packages in phases.

Everyone should benefit from the fund so once they have been served. They should endeavor to carry out the culture of maintenance on the tools and machines to last longer than expected

I Thank His Excellency Nana Addo Dankwa Akufo Addo, President of the Republic of Ghana for his foresight by increasing the Disability Common Fund which has been a financial relief to our brothers and sisters who are deformed in one way or the other

Nana Addo needs our appreciation. We can only appreciate him by voting for him to continue his tenure of office in the 2020 Presidential Elections to give us the best of his social intervention policies aimed at improving the lives of the people. This will be our appreciation for Free SHS, Planting for Food and Jobs, Planting For Export and Rural Development and other Social Interventions “

The Gomoa West DCE tasked Officials from the Department of Social Welfare to keep a proper record of Persons With Disabilities in the District.

assured the Assembly that proper monitoring would be carried out to ensure that beneficiaries make judicious use of monies government spent on them adding there must be value for money.

Chairman of the Gomoa West District branch of Ghana Federation of the Disabled, Mr. Cephas Abeka Neizer praised the NPP government for having the interest of Persons With Disabilities at Heart thus supporting them in divert ways.

As for our District Chief Executive, Hon Bismark Baise Nkum, We are short of words to express our appreciation for all that he has been doing for us. His cordial relationship with us is second to none. Thank you Honourable DCE

What we were witnesses here today has come as a major surprise to us being Members of the Federation made up for Association of the Deaf, Blind and Physically Disabled

Governments upon Governments have failed to do what we are witnessing this morning. This will empower us financially rather than giving us peanuts as was in those days.

In the past governments, our monies were given to party cronies so if you don’t belong to the ruling government, you were left out of the disbursement.

We are going to put the money and the income-generating tools into good use to serve the purpose for which they were given.

I want to appeal to the Works Department of the Gomoa West District Assembly to construct Disabled Friendly facilities for our public institutions in the District to benefit us.” 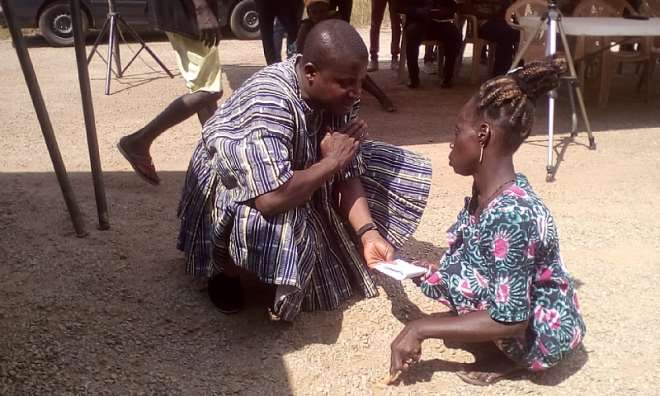