The chiefs and people of Gomoa Ojobi in the Gomoa East in the Central region are full of praise for one of their very own Anthony Mathews after commissioning a reproductive and child Health Unit for Gomoa Ojobi Health Center.

At a short but colourful ceremony on Friday, the Omanhene of Gomoa Ojobi, Nana Atta Kakra IX could not hide his joy seeing the new facility, saying it is a great source of relief for his people.

He was also full of praise and commendation for Lawyer Anthony Mathews, the Chief Executive Officer of Palm ridge estate and Mathews consult who solely sponsored the construction of the new facility.

He expressed great hope that with the construction of the facility which will be of great help to not only the people of Gomoa Ojobi but all surrounding communities the government will see the need to upgrade it to a District Hospital.

The senior midwife at Gomoa Ojobi Health Center Mrs. Janet Frimpong-Manso called for the adequate and proper installation of health equipment at various health centers across the country.

According to her, the clinic lacks adequate infrastructure for quality and safety delivery.

“We are confronted with a lot of challenges, we don’t have toilet facility, water is another thing altogether, at time we used pure water for pregnant women who are put to bed and the sadness of it is, we have only one room which served as emergency room for both males and females, labour ward, children ward, everything is done in that one room which is not advisable”, she said.

Health workers in Ghana, she lamented, are made to overly use their brains in a lot of areas in the field while some simple machines could make their work easier and save the lives of many patients.

Lauding the efforts of Mr. Anthony Mathews for the great support of the facility, she called on other benevolent citizens and organizations to emulate his patriotism and kindness.

Speaking at the function, Lawyer Anthony Mathews, sole financier of the project said having seen pregnant women suffered on the sun to get treatment when passing by, he decided to do all he can to support the clinic when he had the opportunity.

He stressed that the health of residents was the most important thing to him and that was why he was committed to help and resource the clinic.

He urged authorities to maintain the facility as they keep them in good shape at all times.

The Facility is serviced by two midwives and six staff nurses. 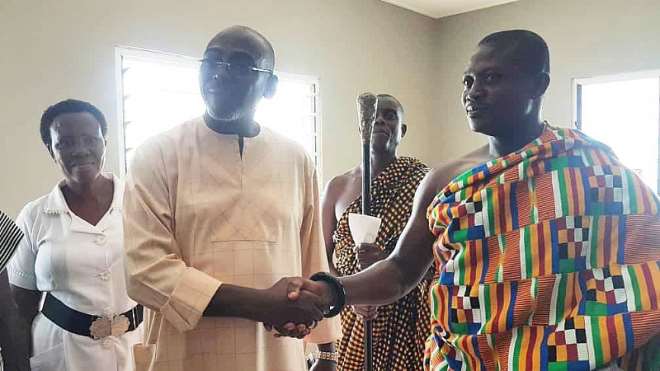