The Wegbe Kpalime D/A JHS in the South Dayi District of the Volta Region has taken delivery of some skills training and educational tools for onward distribution to its girl’s empowerment club.

The donation made by International donors, Global Ministries through the EP Church include 2 desktop computers, Dictionaries and assorted books, oven, cooking cylinder and seeing kits among others.

The rest are trunk, stationary, baking sheets and a hand mixture all at a cost of 2000 dollars.

The donation formed part of ongoing efforts by Global Ministries to fulfill pledges it made to the community including the setting up of a mobile library project, an ICT center which is yet to be completed and skills training program for girls in the community.

Dufia of the Area Torgbui Adza Wiah Kwesi II, handing over the items to the school urges management to efficiently utilise the items to prolong longevity.

The call comes in the wake of numerous kidnapping scares and incidents which have rocked the nation in recent times.

Togbe advised the young girls to instead find solace in educational activities and skills training in order to keep themselves busy even after school.

This he said will go a long way in imbibing into them the value of self-reliance.

He appeal to other benevolent individuals and organisations to come on board in making the yet to be completed ICT center a reality.

South Dayi District Education Director, Justina Ziemeh, who was impressed with stakeholders’ contribution to the vibrancy of the girls empowerment club said she was elated that the school had recorded no teenage pregnancy cases for the past 2 years following the formation of the club.

She urged parents to live up to expectation in molding their wards and equally urged teachers to complement parents’ efforts in the development of children in the area.

A teacher at the Wegbe Kpalime D/A JHS and Facilitator for the club, Josephine Antoinette Akoto, expressed optimism that the items would contribute meaningfully to the development of the girls in several areas including entrepreneurship.

She hinted that the boys would not be left behind as plans are far advanced for the inauguration of a Boys Empowerment Club in the school.

The headmaster of the school, Emmanuel Kwebena Addo called on other schools in the region to introduce productive extracurricular programs designed to keep students busy in order to reverse the trend of teenage pregnancy.

The girl’s empowerment club is an initiative of the Women in Law and Development in Africa (WiLDAF), to stem social vices and discrimination against the Girl Child. 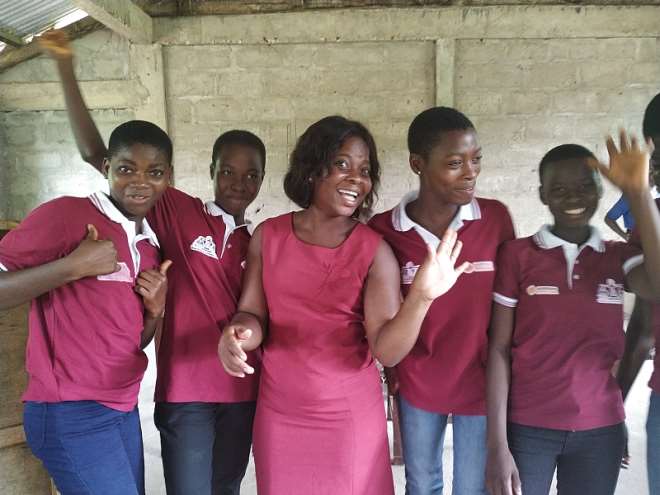 Greetings to everyone from the Ghana Union of Greater Manchester (GUGM) Executive Committee.
We firstly, wish to convey our sincere and deepest sympathies to anyone in our community that has lost loved ones recently, and to send well wishes to all those in recovery from coronavirus (Covid-19).
The impact of Coronavirus in our community has hit many people very hard disrupting all our lives: at the beginning of the global pandemic, the effects happening now, and affects that will happen in the future.

Since the start of the UK lockdown, GUGM has been continuously keeping in contact with community members, especially the most vulnerable. We are monitoring the spread of the virus by following the UK Government and NHS England national guidelines, in order to keep up to date with the ever-changing situation. The health and safety of our community, staff and volunteers is our highest priority. We have done and are doing as much as we can to support as many people as possible.
GUGM recognises the enormous challenges faced by our community and everyone else by having to adapt and change our daily routines to comply with health & safety protocols. We have been busy supporting and informing members through Whatsapp groups and direct calling members that have been at high risk or have underlying health conditions, so we can share regular updates wherever possible.

GUGM has also delivered and shared food and health provisions to the most vulnerable in our community, especially taking care of elder people. We have done this using social/physical distancing to avoid increasing any risks to our community, our staff and volunteers, to maintain as much as possible good health and well-being.
As the Government lifts restrictions and we ease out of lockdown, we will inform and update members through our platforms (Facebook: https://www.facebook.com/ghanaunionmcr; Instagram: https://www.instagram.com/ghanaunionmcr/; Website: https://ghanaunion.org) and other social media including Whatsapp sharing regular updates so we can continue to support everyone.
Please keep following the recommendations of your local and national authorities: keep washing your hands, maintain physical distancing to reduce the risk to all people. GUGM thanks the volunteers and everyone in the community for their continued support during the Coronavirus crisis.