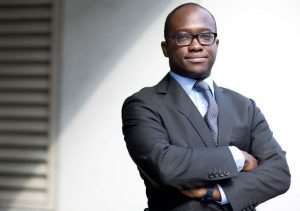 The Tory MP is the 13th person to become the future leader of the party and is the first to back a referendum on any Brexit deal.

Gyimah, who is of Ghanaian descent, previously resigned as the universities minister over Brexit.

Mr Gyimah told Sky’s Sophy Ridge On Sunday: ‘I will be joining the contest to be the next Conservative leader and prime minister to broaden the race.

‘There is a wide range of candidates out there but there is a very narrow set of views on Brexit being discussed.

‘And over the last few weeks, I have watched on discussing with colleagues in frustration that while there’s a broad sweep of opinion in the country on how we move forward at this critical time that is not being reflected in the contest at the moment.’

Mr Gyimah added that ‘carrying on as we are at the moment is not the best way to serve our country.’

He has argued for a 3 option referendum, which would have no deal, remain and the deal negotiated by Theresa May.

Mr Gyimah, the MP for East Surrey, quit the Government at the end of last year over Mrs May’s Brexit plan, and has since become a vocal advocate for a second referendum.

‘What most of the candidates are offering is to offer no-deal and fudge on Theresa May’s deal which has been heavily defeated.

‘Parliament is deadlocked, we all know that, we want to move forward, and we want to be able to bring the country together and so that is why I think a final say on the Brexit deal is the way to achieve that and for the Conservative Party I think what we need to be doing is putting the country first.’

He insisted he was not positioning himself for a cabinet post and said he would find it ‘very difficult’ to serve as a minister under a leader pursuing a no-deal Brexit.