The Ministry of Communications has said the Ghana Technology University College (GTUC) Bill, will be laid before Parliament in the first quarter of next year.

According to the Ministry, it is collaborating with the Education Ministry to hasten the process for the passage of the Bill into law.

In 2016, the then government announced that it was initiating steps to take over the Ghana Technology (Telecom) University College (GTUC) from Vodafone Ghana Limited.

Subsequently, a draft bill to give effect to the transfer process was prepared and considered by the Attorney-General’s Department to complete the takeover during the 2016/2017 academic year, but that has not been fulfilled.

However, speaking to Citi News after a ceremony to swear in the institution’s interim governing council, Communications Minister, Ursula Owusu Ekuful, said all efforts are being put in place to ensure the autonomy of the University.

“I am working with the Minister of Education to achieve this. The Bill will go through parliament once we complete that process. It is a core organization in the government’s digital agenda. We do need a trained workforce with the right skills to assist the government and the nation itself and transit from this informal economy to a digital economy,” she added.

GTUC gets new governing council after a protest by lecturers

Last September, lecturers at the Ghana Technology University College (GTUC) embarked on an indefinite strike over government’s failure to constitute its governing council saying that the absence of the council was affecting the smooth running of the school.

Students were stranded in their various lecture halls, following the decision by their lecturers to down their tools.

But the government has now appointed the following people as interim governing council members of the GTUC with effect from November 1, 2018. 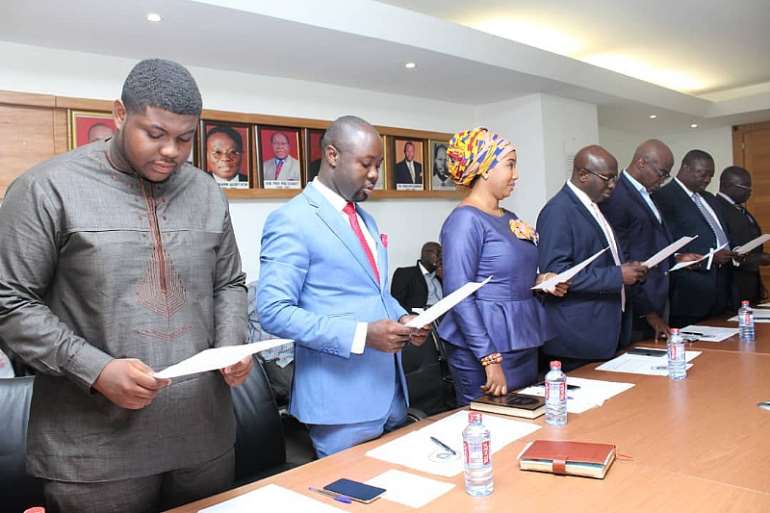 Members of the new Governing Council being sworn in

About GTUC
The GTUC was established in 2006 to provide broad and practical training in technology-oriented education to meet the needs of the country and the sub-region.

The College has its roots in Ghana Telecom’s flagship Training Centre, which was one of a kind in West Africa.

It was first used as a Royal Air Force Training School during the Second World War, and subsequently handed to Cable and Wireless to train Telecommunications Technicians for British West African Countries (i.e., Ghana, Nigeria, Sierra Leone, and the Gambia).

The Training Centre progressed rapidly to become the main source of teaching and certification in Telecommunications Engineering for Ghana Telecom employers as well as other institutions in Ghana and West Africa.

In 2005, Ghana Telecom’s management upgraded the infrastructure and equipment to modern standards in preparation for converting the training centre into a University for Telecommunication and Multimedia Engineering & Information Technology.

However, in 2007, GTUC was part of the assets sold to Vodafone during the sale of 70% of the then Ghana Telecom.