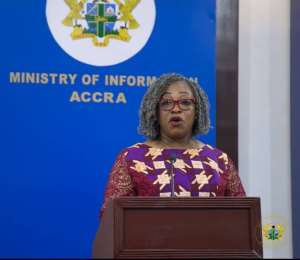 Minister for Foreign Affairs and Regional Integration, Shirley Ayorkor Botchwey has hinted that Ghana is set to deepen its bilateral relations with other countries in pursuit of the national interests of official and State visits.

According to her, such state visits go a long way to affirm the continuous cordial relations that exists between Ghana and other countries.

Addressing the media at a Meet-The-Press on Tuesday, Madam Botchwey said “Ghana’s President was the first to be hosted by South African President, H.E. Cyril Ramaphosa, following his swearing-in as President of the Republic of South Africa. This was an affirmation of the continued cordial relations that exist between the two countries.

“During the visit, the two Heads of State agreed to upgrade the existing PJCC between the two countries to a Bi-National Commission to be held under the leadership of the two Presidents. A joint statement of intent was signed regarding technical cooperation in the field of strategic railway infrastructural development. Another significant outcome of the visit is the ongoing discussions for a ninety (90) day visa exemption for ordinary passport holders on a reciprocal basis.”

She added that Ghana’s bilateral relations with countries in the Middle East region also witnessed significant improvement, particularly in the area of education, trade and investment, employment, tourism, and infrastructural development.

“Since the current government assumed office in January 2017, the Ministry of Foreign Affairs and Regional Integration has witnessed an exceptionally intense level of diplomatic activity covering a wide range of bilateral and multilateral issues.

“In the process, Ghana’s image has soared as evidenced by the exchange of numerous high level visits; appreciable inflows of foreign direct investments; the leadership role accorded the President in the promotion of gender and the sustainable development goals as well as the mediation in the Togolese crisis. The decision by the leadership of the African Union to choose Ghana as the host country of the African Continental Free Trade Area (AFCFTA) is a powerful demonstration of the immense respect and goodwill Ghana enjoys in the international community.

“The renewed interests for deeper cooperation were as a result of a series of official visits and the conclusion of important agreements to re-define these relations for the mutual benefits of Ghanaians and the people of those countries. The opening of Ghana Embassies in Doha, Kuwait City and Abu Dhabi was a demonstration of the deepening of relations between Ghana and countries in that region. The United Arab Emirates and the State of Qatar reciprocated by establishing their Embassies in Accra. Malta and Suriname were also two countries that opened their Missions in Accra.” the Minister recalled.

Madam Shirley Ayorkor Botchwey further disclosed that despite the vile media reports regarding the inhuman treatment of some Ghanaian migrant workers in the Gulf States, her outfit in keeping with its mandate is working to protect the interest and welfare of its citizens abroad.

“The Government is working with relevant stakeholders to establish the legal framework to regulate the recruitment and protection of Ghanaian migrant workers in the Gulf region to ensure that their fundamental human rights and dignity are respected. Negotiations are currently ongoing with the United Arab Emirates, the Kingdom of Saudi Arabia and the State of Kuwait, and other countries in the Gulf Region. The Agreements under consideration include Regulation of Labour Migration and Model Employment Contract between a Kuwait Employer and a Ghanaian Labour Migrant; and Agreement on Domestic Workers Recruitment between the Kingdom of Saudi Arabia and Ghana,” she intimated.

The Foreign Affairs Minister highlighted Sinohydro Projects, Participation of Chinese Companies in 1D1F, Sinotruck Assembly Plant and Tamale Interchange as some of the benefits of Ghana’s bilateral relations with China.

“Ghana has also opened a Consulate in Guangzhou, China, to enhance the promotion of trade and investment between the two countries and to also address the consular-related needs of Ghanaians. The existing friendly relations and cooperation between Ghana and Japan received a further boost and led to the Exchange of Notes and Signing of the Project for Improvement of Equipment for the Production of Television Programme for Ghana Broadcasting Corporation (GBC). The Grant Agreement enabled GBC to access an amount of US$ 600,000.00. Similarly, under the grant Agreement for the Economic and Social development project, an amount of US$2.73 million, will among other things, provide the Ghana Police Service with communication gadgets and vehicles. Relations with Cuba were also given a boost. A state visit by President Nana Addo Dankwa Akufo-Addo from 3rd to 6th April, 2019 highlighted the cordial relations between Ghana and Cuba and the celebration of the 60th Anniversary of the formal establishment of diplomatic relations between the two countries,” she stressed.

Speaking on Economic Diplomacy, Madam Shirley Ayorkor Botchwey hinted that foreign policies such as the domestic policy seek to advance national goals adding that it is also of vital national interest.

“Economic Diplomacy supports the national objective of diversifying and increasing Ghana’s export base by actively seeking markets for Ghanaian products abroad and taking advantage of preferential arrangements and multilateral trade agreements. Economic Diplomacy also supports the diversification and expansion of the tourism industry for job creation and revenue generation by marketing Ghana abroad as a competitive tourist destination and attracting investment into the hospitability industry. The Government under President Akufo-Addo prioritizes the development of economic opportunities in Ghana’s foreign policy by opening up markets for Ghanaian exports and attracting foreign direct investments (FDIs) into the country,” she disclosed.

She added that economic diplomacy has become a central focus in the implementation of the country’s foreign policy in taking of advantage of its huge economic and trade potentials.

“To give meaning to this policy direction, the Ministry re-established the Economic, Trade and Investment Bureau (ECTIB) in June 2017 to bring focus to the Ministry’s economic activities and its collaboration with other institutions. We practice economic diplomacy at home too. In 2018, the Ministry organized its maiden Bazaar Extravaganza of “Made-in-Ghana” goods and services. The Exhibition brought together over fifty (50) indigenous entrepreneurs to display their wares and products. The Diplomatic Corps, as well as the general public were invited to the two-day event at the premises of the Ministry. The successful maiden Bazaar encouraged the Ministry to organize the just ended 2nd Made-in-Ghana Bazaar which was highly patronized by the public,” she emphasized.

She however acknowledged that the agreements usually signed at the end of these sessions, produce tangible outcomes, such as the establishment of industries and the consequent creation of jobs, technology transfer as well as know-how then learning of best practices.

The sector posited that her outfit continues to discharge its mandate as outlined in the Passports and Travel Certificate Act 1967 (N.L.C.D. 155). In carrying out its functions, the Ministry works in collaboration with other relevant MDAs such as the Birth and Death Registry, Controller and Accountant General’s Department, Ghana Immigration Service and other Security Services, all of which have representatives stationed in the respective Passport Application Centres (PACs) across the country.

A further check also indicates that over the past two years, the Ministry has embarked on a number of initiatives to facilitate the process of passport acquisition for Ghanaians. Among these includes the online passport application; downloadable Portable Document Format (PDF) Passport Application Form.

Others are extension of Passport Applications Centers (PACs) to eight (8) regional capitals; the establishment of the Premium Passport Application Centre; overhauling of passport processing equipment; extension of the validity of passports from five (5) years to ten (10) years among others. Additionally, there are plans to introduce 48-page passports to satisfy the needs of frequent travelers before the end of this year.

The Minister said “I believe most applicants will now attest to the improvement in the passport service delivery. We are not there yet but we are making impressive progress. The Ministry has started discussions aimed at introducing chip embedded passports to keep up the pace of technological advancement and enhance the security of Ghanaian passports.”

Addressing issues on Migration issues, Madam Shirley highlighted that it has become a thorny global issue which can be properly addressed in the spirit of partnership and respect for international law and treaty obligations.

“Dealing with the scourge of irregular legal migration has become more pronounced in the wake of the modern-day slavery as was recently reported in Libya, where a large number of sub-Saharan Africans were being auctioned as slaves. In collaboration with IOM, the Ministry facilitated the voluntary repatriation of about eight hundred and forty- three (843) irregular Ghanaian migrants under the “Return, Readmission and Reintegration Programme”, via a chartered flight from Tripoli, Libya, to Ghana. The International Organization for Migration (IOM) is currently implementing a project dubbed “Strengthening the Management and Governance of Migration and the Sustainable Reintegration or Returning Migrants into Ghana” with an amount of three (3) million euros. The project seeks to support the Government to improve the reintegration of six hundred and fifty (650) returning migrants, strengthen national structures to manage the reintegration process in a dignified and sustainable manner’” she noted.

The Foreign Affairs and Regional Integration Minister stressed that meetings to discuss and adopt a concerted and pragmatic approach to international peace and security are of concern to the Ministry and the Government as a whole.

“As a founding member of the African Union, Ghana continued to forge partnerships with like-minded countries to achieve the vision of a free, peaceful and prosperous continent. The Ministry actively participated in a number of regional conferences on security. One example was the Conference in Bamako in October 2017 on the security situation in the Sahel and West Africa regions. The objective of the Conference was to assess, determine and adopt suitable interventions to neutralize the activities of criminal organizations within the Sahel-Sahara region in West Africa. The Conference concluded with the adoption of the Bamako Declaration. Ghana hosted the United Accord (UA) multilateral military exercise in May 2017, where more than sixty (60) US Soldiers were trained by Ghanaian Soldiers at the Jungle Warfare Training School in Achiase under the United Accord 17 (UA17) training programme. This was the first time an African partner-nation had trained U.S soldiers,” she mentioned.

Madam Shirley Ayorkor Botchwey also highlighted that the Ministry’s Diaspora engagement policy is grounded in the realization of the rich experience, expertise and skills possessed by its citizen living in abroad for national socio-economic development.

“The Ministry in collaboration with the Diaspora Affairs Office at the Office of the President and the National Service Secretariat has facilitated the process for the second and third generation Ghanaian diaspora to undertake their national service in Ghana. This is expected to assist in integrating them into the Ghanaian society. This year, 2019, marks the 400th Anniversary of the arrival of the first slave ship from Africa on the shores of the United States of America. President Nana Addo Dankwa Akufo-Addo, in December 2018 launched “The Year of Return” to commemorate the occasion and to encourage African-Americans and people of African descent to return to their homeland and contribute to the development of the continent. The “Year of Return” thus serves as an avenue to give fresh impetus to the quest to unite Africans on the continent with their brothers and sisters in the diaspora.”

The Ministry however commended the media for its professionalism exhibited over the years as well as partnering the implementation of Ghana’s foreign policy objectives.