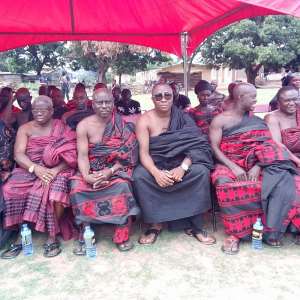 His mortal remains after a solemn ceremony was later transferred to Kokofu where the body was finally laid to rest.

Tribute after tribute echoed his remarkable and dedicated commitment to public service and disciplinary nature throughout his life.

Abraham Kwadwo Kwakye died at his private residence in Atebubu on Monday, January 22, 2018 at age 70.

Nana Kwakye as he was affectionately called taught as a tutor at the Atebubu Senior High School in the 90s and even rose to become the Assistant Headmaster.

He was later transferred to the Atebubu District Education Office where he served in different portfolios for so many years.

In 2006, he was appointed as the Deputy Brong Ahafo Regional Minister by former President John Agyekum Kufuor, a position he held until the NPP lost power in 2008.