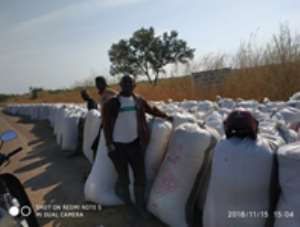 The farmers say ever since the introduction of the policy, it has become the lifeline to their livelihood.

The farmers who live in communities including; Kayaro, Nakong, Asonia, Gwenia, Kafania Yedania, Adognia, Wuru and Katui among others expressed satisfaction at the modalities and operations of the policy and said it was able to provide them with fertilizer and other inputs including; high yielding and early maturing seeds to plant on their farms.

Mr. Robert Adjuadaga and Clement Kaba, all peasant farmers from the Dakuronia community in Kayaro who cultivate maize and groundnuts told the Ghana News Agency in an interview stated that they used to cultivate smaller farms, which were less than one hectare of farmland, but when they were introduced to the policy last year they successfully expanded their farms.

Mr. Adjuadaga noted that even though they were new to it and could not access the support of the agricultural extension officers, they managed to use the inputs and fertilizer they acquired to get the needed production.

He disclosed, ‘I, in particular in my whole life have never cultivated a big farm and harvested more than two bags of produce, but by the intervention of this PFJ, I harvested almost thirty bags of maize and fifty bags of groundnut and I think it’s a miracle’ he said.

Madam Awe Juadaga a widow and peasant farmer from the Katui community said what she harvested from her farm as result of the policy could feed her family till the next two farming seasons and commended the government for empowering them to have better livelihood through the PFJ.

Mr. Justine Akiati Adiali a livestock farmer from the Asonia community said the PFJ had come to stay and that they as traditional community-based farmers would ensure its sustainability, and commended the government for introducing the Rearing for Food and Jobs.

He said that would complement the PFJ and create more jobs for the youth in his community since most of them would emulate his livestock farming activities.

Mr. Gerard Ataogye District Chief Executive (DCE) for the area, said the government was committed to improving on the quality of livelihoods of the people through such a basic and vital strategy.

Mr. Ataogye said the One Village, One Dam, One District, One Factory and the One District One Ware House among others were all operational in the district and there was the need for the people to support the programmes to succeed.

He called on the people to assist the assembly to focus on the development of the area, especially on health, education and improve on agricultural activities to sustain the food security in the district.