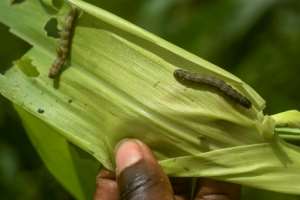 Ashanti Region has recorded yet another outbreak of the Fall Army worms in the 2019 farming season with close to 2,000 hectares of maize farms currently under attack.

The Regional Director of NADMO Hon. Kwabena Senkyire, told otecfmonline.com that all the affected maize farms have been sprayed with insecticides to curtail the situation from spreading to other areas.

Hon. Kwabena Senkyire disclosed that the current intermittent heavy rains have also restricted the spread of the army worms to other farms.

“Our NADMO officers are aware of the situation and they are charged to report to the office if they reoccur, and the farmers also must immediately inform us if they any sign of reoccurrence,” he appealed.

According to reports available by NADMO, Asante Akyem North District was heavily hit by the fall army worm with 1,286 hectares affected.

“More than 90 percent of the farms duly recovered, no affected maize farm has been destroyed at Agogo, Juansa, Pekyerkye, Magyeda, Akutuase, Dome, Wuranponso and Afiresere farming areas,” the report captured.

With regards to Mampong and Obuasi municipals, a total of nine and half acres of land of maize farm are affected and sprayed at Apitikooko, Anwoma and Asaam respectively, according to the report.

Hon. Kwabena Senkyire commended the personnel of the Ministry of Food and Agriculture (MOFA) and NADMO, for their collaborated efforts in the control of the Fall Army worms this year.