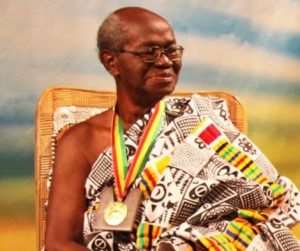 The late Emeritus Professor Joseph Hanson Kwabena Nketiah, a renowned Ghanaian Ethnomusicologist, will be given a state burial on Saturday, May 4, 2019 preceded by a pre-burial service at the Forecourt of the State House.

His funeral will be characterised by lots of rich Ghanaian cultural displays as well as performances by the Winneba Youth Choir and the Immanuel Congregation Choir, Presbyterian Church of Ghana, Madina New Road, where he fellowshipped.

The Ghana News Agency (GNA) visited the residence of the Late Prof. Nketiah, where a Book of Condolence has been opened.

In a conversation with his two daughters; Professor Akosua Perbi, a Retired Historian, and Reverend Priscilla Naana Nketiah, a Lawyer, they shared fond memories of their father with the GNA.

Prof. Akosua Perbi, his eldest daughter, said her father would be remembered for his music and interest in culture, adding; “he was a real scholar.”

She said the name Nketiah became synonymous with music and “by virtue of the fact that I was Nketiah, I was forced to do music instead of my preference History at the O’ Level.”

“My father was such an inspiration and an encouragement, he was approachable, he lived a meaningful life”.

Rev. Priscilla Naana Nketiah, on her part, said: “My father had achieved so much and has received many awards but he was very humble and down to earth.”

“He had a listening ear and he was very generous, he was generous not only in giving material things but also sharing his knowledge. He said his works should be shared.”

Rev. Nketiah said her father also had a strong faith in God adding: “We saw him go through trying times in life when our two brothers and our mother died, his faith in God is what kept him going.”

“To the world he was a Musicologist, a writer, and a composer, but to us he was just a father who was there for us, he guided us to follow our passion, we want his legacy to live on.”

Professor J.H. Nketiah was born on 22nd June, 1921 at Asante Mampong. He had over 200 publications and 80 musical compositions to his credit.