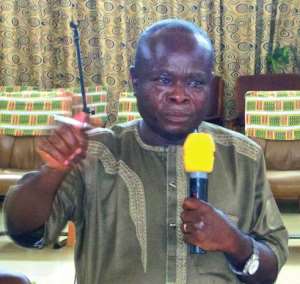 The Effutu Municipal Assembly as part of its measures to avoid the reoccurrence of flooding experienced in the recent years has distilled major drains in the municipality.

The stream channels that was distilled were the AME Zion School, Ntakorfam, Zongo and West Roundabout where volumes of water pass when there is a down pour resulting to flooding at communities in those areas and was funded from their Urban Development Grant (UDG) and the District Assemblies Common Fund (DACF).

Mr. John B. Ninson, Effutu Municipal Chief Executive (MCE) announced this at the First Ordinary Meeting of the Third Session of the Sixth Assembly held at Winneba.

He said a number of projects were executed since the last Assembly Meeting mentioning some of them as; the construction of the Church of Christ Road, two Number,double 1.8 mm diameter pipe culvert on ECG link Road and that of Relax Lodge link road also with funding from the UDG.

He announced that the Assembly got an approval to patch and grade local roads in the Municipality, and they would resurface a three-kilometre stretch of road in Winneba Township.

He said the performance was quite impressive, but there was the need for the assembly members to continue to sensitise their electorate to honour their tax obligation for the assembly to collect more of their IGF for development alongside the Common Fund, DDF and UDF.

‘The challenges that the Assembly is encountering are teething problems emanating from the Ghana Integrated Financial Management Information System (GIFMIS) which sometimes cause delays due to the chain of approval processes and unstable nature of the internet system.

‘We hope to streamline things well enough soon in order to do away with such challenges,’ he stated.

He therefore call on the Assembly members to be alert at their electoral areas and to report such insecurity issues to the assembly for the necessary action.

Mr. Ninson said sanitation was another challenge the assembly was facing and to make the Effutu Assembly Municipality litter free and defecation free, there was the need for them to intensify their education for landlords to build domestic toilets to help the municipality achieve Open Defecation Free (ODF) status by March, 2019.

‘As an Assembly, we will construct modern toilets powered by solar panels for the provision of electricity, overhead water tanks and bio-gas digesters incorporated, at Akosua Village, Penkye, Sankor, Gyahadze, Nsuekyir and Kojo Beedu communities as means of discouraging open defecation in those areas’.

The facilities were to be funded under the One Constituency, One Million Dollar programme, he added.