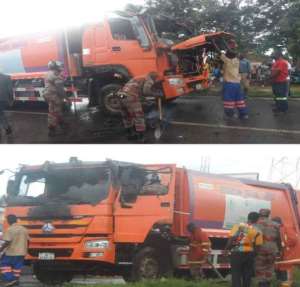 The incidence occurred around 1500 hours while the vehicle with registration number GR 6169-16 was in motion in front of the Union Filling Station on the Sunyani-Atronie road at New Town, a suburb within the centre of the city.

Mr. Tahiru and his mates, out of shock for nearly losing their lives became speechless and could therefore neither talk to the Ghana National Fire Service (GNFS) nor the media regarding the cause of the fire.

But an eye-witness who pleaded anonymity explained to the Ghana News Agency (GNA) that there was a sudden noise of explosion from the truck which generated a smoke from the drivers` side, which instantly, resulted in a flame of fire that completely burnt the windscreen and the entire front part of the vehicle.

According to the eye-witness, a young man in his thirties, the driver and the mates forcibly opened the doors and jumped out when they saw the smoke before the vehicle burst into flames.

It took five minutes for a five-member team of Fire Service personnel led by Staff Officer John Kwaku Abour from the Sunyani Municipal Fire Station to arrive at the scene to extinguish the fire.

When contacted, Assistant Division Officer One (ADOI) Ruth Mensah-Tandoh, the Brong-Ahafo Regional Public Relations Officer of the GNFS told the GNA that the cost of the damage was unconfirmed while the cause of the fire was also under investigation.