The Executive Chairman and Founder of the Jospong Group of Companies, Dr Joseph Siaw Agyepong, has been awarded “The Prestige Man of the Year Award” at the maiden African Prestigious Awards held in Accra.

In addition, he also won an Honorary Award while some of his companies also received recognition for their achievements and impact on lives in Ghana and Africa. In all there were 24 meritorious and 27 Honorary awards to deserving individuals and companies in their contribution towards developing Africa.

The First Edition of the African Prestigious Awards was held in Accra, under the theme “Celebrating Achievers of Africa”, and is aimed at honouring and motivating individuals, institutions and countries on the continent to rise and build the continent.

Mr Emmanuel Gyau Addo, Executive Officer of EAD Group of Companies, organisers of the glamorous award ceremony said the award recognized and honoured 14 countries that are doing well in terms of economic development, four living heroes from these countries and finally African owned organisations under categories like Entertainment, Telecommunication, Media, Business & Finance as well as Oil and Gas.

He stated that there is a cause to write the story of Africa for the world to read instead of waiting for them to write negatives of our beloved continent. He appealed to the corporate world and other institutions to support the award so it can be expanded to touch more lives across Africa.

Mrs Sophia Lissah, Group Head, Communications who received the Honourary Prestige Man of the Year Award on behalf of Dr Agyepong, said the gesture will spur him on to continue to improve the lives of people which something he has set himself to do.

“The Executive Chairman is one of the great entrepreneurs of our time who believes in having local solutions as Ghanaians and Africans to our peculiar problems, he affirms that the continent has great potential and given the opportunity and the right support and enabling environment, Ghana and for that matter Africa can move beyond Aid as envisioned by the President Nana Addo Dankwa Akufo-Addo.

Madam Lissah lauded the organisers of the event for the great vision which is not just targeted at Ghanaians but achievers and super achievers all over Africa including Heads of States.

Mr Edgar Arcos, the Chief Operating Officer of the Jospong Group who received the Best Oil and award on behalf of the company commended the oganisers for the vison of appreciating Achievers in Ghana and for recognising the hard work and dedication of the team that works in the Oil and Gas Waste management space whose efforts won the award.

He believed this will motivate the team to do even more and urged other subsidiaries in the Group and other workers to work hard knowing that there is someone watching you and on the day of reckoning will reward you according to your works.

The night saw a number of African Head of State receiving Honorary Awards also had other awardees on the day included LAS Liberty School of Ghana, the brainchild of Mrs Cynthia Agyepong, OmniBank, Apostle Dr Kwadwo Safo-Founder and Leader of Kristo Asafo Church and the owner of KANTANKA automobiles, Tony Elumele of UBA and Founder of Tony Elumele foundation which gives support to young entrepreneurs across Africa; Evariste Akoumian and partners from La Cote d’Ivoire, founders of solar briefcase- SOLARPAK. 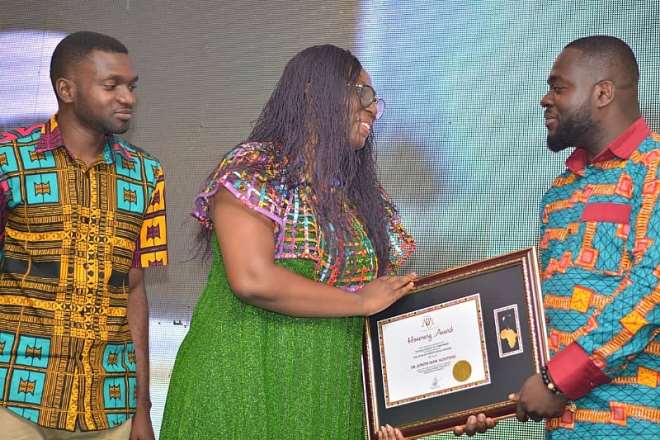