The Bono Regional Minister Madam Evelyn Kumi Richardson, alongside her deputy and other entourage, has paid a working visit to the Dormaa East District.

The visit was to offer her an opportunity to interact with chiefs and people of the area and gain firsthand information on the state of education and healthcare delivery in the district in order to see how best the region can assist in the quality performance of these sectors.

In her honour were major stakeholders in both health and education services, the staff of the District Assembly, Assembly Members, Gyasihene of Mansen Traditional Area and his council of elders among others.

In open forum discussions towards the growth of education and healthcare in the district, the Minister reiterated that quality healthcare delivery and access to education by all, cannot be overemphasized in terms of the socio-economic development of the nation and the Akufo Addo led government is burnt on doing everything possible to better it.

She added that the current ongoing health screening for school-going children across the country is a deliberate attempt by the government to among other things empower future economic productivity, the social well-being of the people and a well-developed human capital for a prosperous Ghana.

She, therefore, entreated all and sundry to pray in support of the numerous and noble visions of the government to ensure a better yield of its fruits.

In a welcome address, the District Chief Executive, Hon. Emmanuel Kofi Agyeman took time to enumerate some of the benefits the district has chocked under the current government since it assumed office. He mentioned an Agriculture Mechanization Center, Poultry Processing Factory, a College of Agriculture (Okuafo Pa Project) as some of the benefits among others. He expressed appreciation and thanksgiving on behalf of the people of the district and called for continues assistance especially in health care delivery.

The Member of Parliament of the Constituency and Deputy Minister of Monitoring and Evaluations Hon Williams Sabi announced the intention of the government to build a complete ultra-modern hospital facility soon for the district saying that plans are still in the pipeline and it would soon materialize.

Both the District Directors of Education and Health took turns in enumerating their successes and challenges and some suggested measures identified as short term solutions of major problems hindering the progress of the sectors.

Major problems common to both sectors included accommodation, means of transport, motivational incentives, infrastructure and lack of a gazetted by-laws to deal with some issues hampering the achievements of their goals. 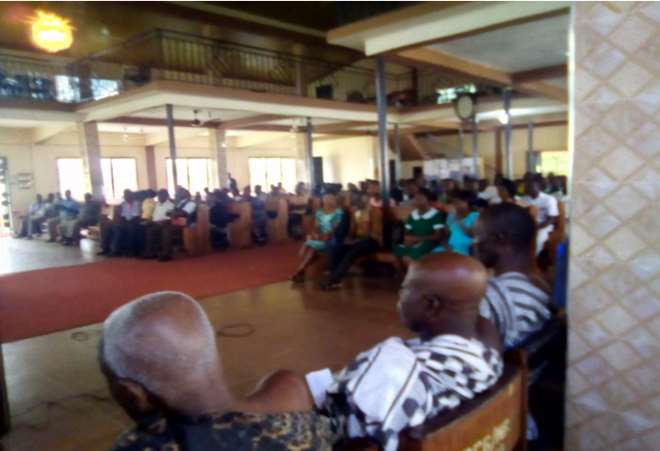