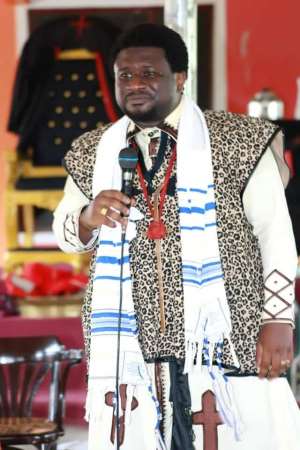 The Leader and Founder of Universal Spiritual Outreach Church, Prophet Abed Kwabena Boakye Asiamah has expressed concern over the ill attitudes and ungodly acts pervading the celebration of Easter in recent times.

He highlights the need to understand the concept of the celebration of Christ’s death.

Prophet Kwabena Boakye lamented how people are losing out on good virtues and diluting the very purpose of existence for which Christ was crucified as he called on Christians and Ghanaians to prioritize the main idea of celebrating Easter.

The festive occasion which epitomizes the death and resurrection of Christ in recent years has been characterized with several forms of immorality, which Prophet Abed Kwabena Asiamah described as a misrepresentation especially among Christian communities.

According to the Prophet, Easter must not be used by Christians for fun, but rather, for putting Jesus at the center of Christianity as well as to be grateful for how the son of God came to die to deliver mankind from sin.

Speaking to the media on Saturday, April 20, 2019, Prophet Abed Kwabena Boakye Asiamah cited the essence of Easter as the ‘Resurrection of Christ’ and the power of the resurrection which gives Christians a new beginning.

“Although there are many benefits we can derive from it in terms of family reunions and people meeting together and people traveling to their hometowns and so on, it’s all about Jesus. And we have to put Jesus at the center of Easter”, the Prophet stressed.

He further shared Easter is the greatest feast of the Church because without the resurrection of Christ there would be no hope for Christians.