The Deputy Information Minister-In-Charge of Operations, Mr. Perry Curtis Kwabla Okudzeto, has charged Regional and District Information Officers to live up to their expectation as government spokespersons in their various jurisdictions of operation.

This he said would deepen the country’s democracy and ensure accountability in Ghanaian society through the collation of feedback from the general public on government intervention initiatives. 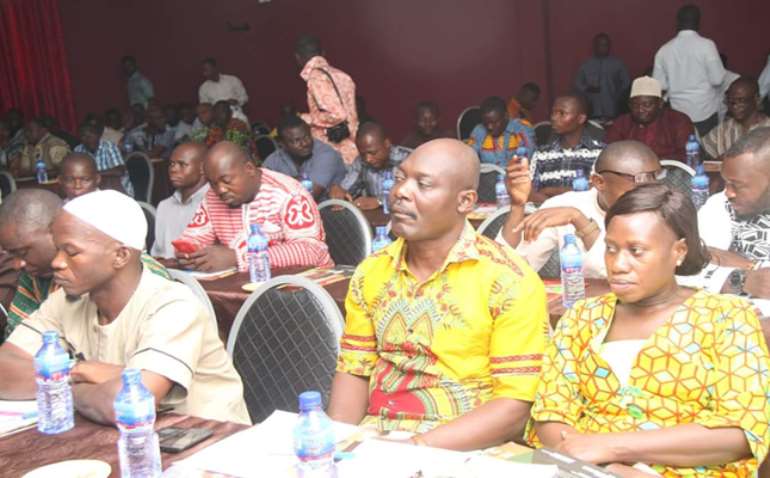 He reiterated government’s commitment to fulfilling promises enshrined in the governing Party’s 2016 campaign manifesto and highlighted on some of the flagship programmes that the Akufo-Addo, Bawumia led administration has implemented since assumed office.

Mr. Okudzeto made these sentiments in Sunyani at the weekend when addressing officers of the Information Services Department (ISD) drawn from the Brong Ahafo, Northern, Ashanti, Upper East and Upper West regions during this year’s Training of Trainers workshop, as part of preparation towards the 2018 Town Hall Meetings.

The Town Hall Meeting among other things was designed to provide a platform for local and national politicians as well as Members of Parliament to meet their constituents for the purpose of explaining major government policies and programme to them.

“The prerogative of these meetings is to provide equal opportunity for office holders to meet the Ghanaian citizenry and discuss the issue of National Interest that affects the social wellbeing of the people”, he stressed urging Metropolitan, Municipal and District Chief Executives to take advantage of the initiative to showcase the developments in their areas.

He disclosed that the Town Hall Meeting would be officially launched on 7th May 2018 at Dzodze in the Ketu North District of the Volta region after which 100 selected Metropolitan, Municipal and District Assemblies for 2018 would be implemented concurrently in the first phase of 50 districts nationwide.

The officers who are expected to go back to their respective regions and districts to interact and educate the masses on these interventions by government in a series of engagements were briefed on government flagship programmes to be rolled by the various sector Ministries.

One the Free Senior High School policy, the Technical Economic Advisor to the Vice President, Dr. Gideon Boako revealed that about 30% of students from public Basic Schools are mandatory offered placement annually to the elites Senior High Schools in the country.

He announced that enrolment figures from the 2016 academic year and that of the 2017/2018 increased by 69,000 with the roll-out of the Free Senior High School educational policy.

In an address, the Senior Technical Advisor on Development Planning at the Ministry of Planning, Dr. Kojo Essiam Mensah-Abrampah disclosed that the Coordinated Programme of Economic and Social Development Policies tabled by President Akufo-Addo to parliament among other things offers a radical approach to resolving challenges on a more permanent basis, restore hope in economy and produce a meaningful life for all Ghanaians.

For her part, the Ag. Director of ISD, Ms. Elizabeth Efua Essel called on the staff of the department to step up their efforts to remain relevant to the needs and aspirations of the government. This she said would make ISD regain its past glory as the main publicity arm of government.

She stressed the need for high-quality work, innovative and creative thinking, value-based education, responsible work ethics as goals to support the development and restructure agenda of ISD.

Ms. Efua Essel further stated that the Ministry was a commitment to the efforts and vision towards the development and betterment of the department and expressed the hope that all officers should make use of available resources and what was yet to be supplied to enhance their work for national development.