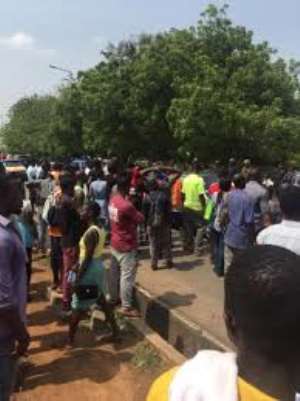 The young men and women involved in the youth in the forestry program in the Savanna regional capital of Damongo have boycotted the program citing various concerns affecting them.

Numbering up to 50, the youth claim they use the money paid them at the end of the month to hire vehicles that carry them to their workplaces which are miles away from Damongo.

They also claim that on daily basis, they pay as much as 2 to 5 cedis to get to where they are supposed to work even though their monthly salaries are not consistent every month and when the money comes they receive only 400 Ghana cedis.

This according to them was not part of the agreement before they were recruited since they were promised a means of transport to where ever they will be working.

It took the supervisor of the program in the regional capital Mr. Wahab Miran hours to convince the youth to move to go to work on yesterday Tuesday, promising to get in touch with authorities to address the concerns raised by his team.

Many of the workers, however, threatened to quit the program since monthly allowances are also a major problem for them.

According to them, they are yet to receive the allowances for February and March with work expected to be ongoing.