Partners of Nature-Africa (PONA), a Non-Governmental Organization (NGO) in reclamation and rejuvenation of lands destroyed by galamsey activities, in collaboration with Bygus Group of Companies and the West Akim Municipal Assembly, has embarked on a project to plant coconut on reclaimed lands at Akyem Kobriso.

According to the Operations Director of PONA, Mr. Forster Amofah, the project is aimed at creating employment and restoring the economic viability of the degraded lands.

He disclosed that, so far, PONA has planted the Sri Lankan Dwarf coconut on some 30 acres of reclaimed land with more left to do.

“The Sri Lankan Dwarf coconut is fast-yielding with a gestation period of two and a half years, faster than the old type. It also has very high yield, guaranteeing higher profits,” Mr. Amofah disclosed.

The project is irrigated with water from the Sushen river to sustain it all year round. Mr. Amofah revealed that the banks of the river would be planted with bamboo, as part of measure to sustain it and its immediate environs.

The West Akim Municipal Chief Executive (MCE), Hon Seth Oduro, said the Assembly entered into partnership with PONA as part of its environmental initiative aimed at restoring degraded lands and protecting the environment from destruction.

He was optimistic the choice of coconut as the preferred plant would bring about some economic benefits to the area and serve as incentive to the youth to get involved.

He expressed appreciation to PONA and Bygus Group of Companies for the initiative, urging them to expand it in the area and beyond.

Partners of Nature Africa has been involved in the reclamation of degraded lands as a result of illegal mining activities.

It has reclaimed over four hundred acres of land mainly in the Ashanti and Eastern regions, after touring some eight regions of the country. 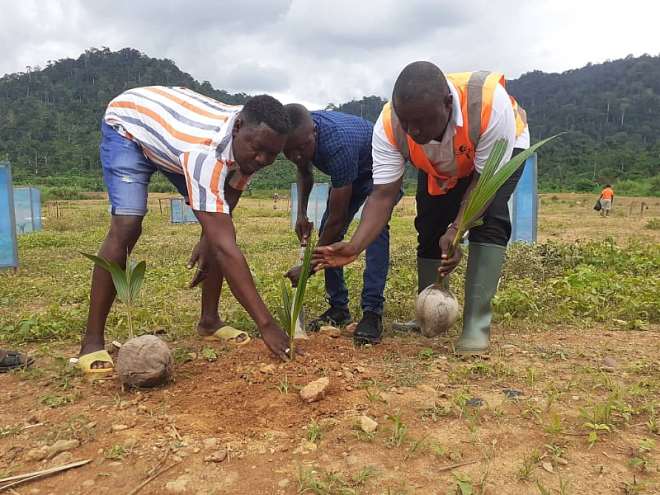