The Atebubu area of the Church of Pentecost has organized a second in a series of clean up exercises in Atebubu aimed at promoting cleanliness throughout the Atebubu-Amantin municipality.

Members of the church were joined by keep fit clubs and other individuals last Saturday in a three hour exercise which saw them weeding, sweeping, dusting and desilting gutters at both the municipal hospital and the central business district.

Addressing participants after the exercise, the Atebubu Area head of the Church, Apostle Kenneth Baffoe Antwi said the exercise is in line with the five year nationwide ‘Creation Care’ objective of the church which has to do with environmental cleanliness and protection.

He said the church will seek collaboration with other identifiable bodies including Muslim groups to broaden the scope of the campaign adding that insanitary conditions have adverse implications for all.

Apostle Antwi stated that in carrying out the campaign, the church will not only be seeking the spiritual development of the people but their physical wellbeing adding that a clean environment will put Atebubu in stead for the capital of the proposed Bono East region.

The Atebubu-Amantin municipal chief executive Hon. Edward Owusu thanked the church for the initiative and pledged the support of the municipal assembly in future cleanup exercises.

He said by February next year all households in Atebubu will be provided with dustbins for the management of waste adding that the assembly will take a look at its bye-laws to enable it deal appropriately with those who litter the environment.

The Member of Parliament for the Atebubu-Amantin constituency, Hon. Kofi Amoakohene alluded to the Biblical quotation ‘cleanliness is next to Godliness’ and promised to work to get other religious denominations to get involved in the noble cause.

Present were district Pastors Seth Tetteh Tawiah and Jakpah Konlan both of the church. 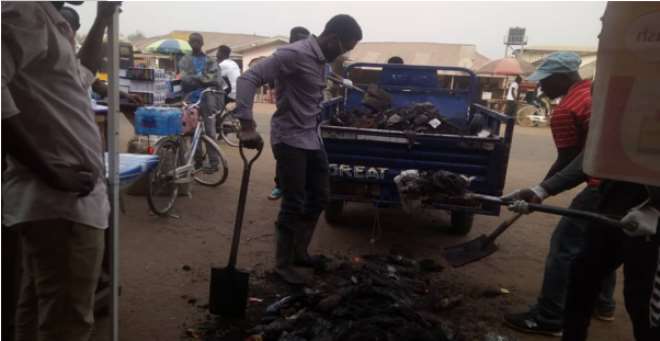