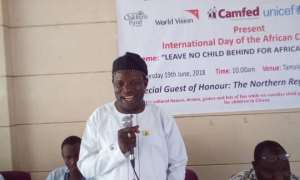 Mr Kwebena Tutor, Acting Country Director of the Christian Children’s Fund of Canada (CCFC) has expressed worry about the continuous use of under age children in child labour.

He said the Ghana Labour Standard Survey has revealed that about 1.9 million children aged between five to 17 years out of the eight million nationwide were still engaged in child labour.

According to him, in the Northern Region about 13.8 per cent of children between the ages of five to 17 years do not attend school.

The Theme for this year’s celebration was ‘Leave no child behind for African’s development’ and aimed at raising awareness about the need to protect and empower children.

The event been commemorated in the Northern Region was organised by CCFC, World Vision, Camfed, RAINS, Actionaid, Right to play, plan Ghana, UNICEF and the Department of Children, was to advocate for the protection of children’s rights and equal opportunities.

It was also in line with resolution CM/Res.1290 (XL) to commemorate the 1976 massacre of Soweto children, who merely took to the streets to demand their right to racism-free education, in the then Apartheid South Africa.

Mr Tutor stated that 13.7 per cent of the children stay at home to assist with the household chores, while 31.2 per cent of children were engaged in economic activity like kayayo due to increase in poverty levels.

He said there was need for African governments to prioritise children’s rights in the implementation and also to monitor the Sustainable Development Goals (SDGs) to ensure that no child is left behind.

He noted that children should be viewed as agents of change and not merely as subjects of protection, especially concerning the realisation of the SDGs.

Mr Tutor called on the government and other stakeholders in the SDGs to broaden opportunities for children’s participation in all 17 SDGs as they equally affect children.

He added that there was need to create opportunities for children to express their views on the SDGs and to also contribute towards the accomplishment of those goals for Africa.

According to him, there were gaps in gender because many cultures favoured boys than girls and it reflects in school enrolment figures and also in employment opportunities available in the country.

He noted that the government was working hard to meet the SDGs by putting in place a lot of initiatives like free SHS policy.