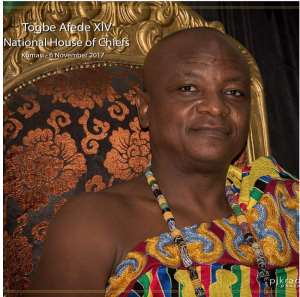 The Standing Committee of the National House of Chiefs has urged Politicians and political commentators to exhibit true spirit of nationalism and patriotism in all their endeavours to unite the people and maintain peace in the country.

The House of chiefs made the call when the Minister of Regional Reorganisation and Development, Hon. Daniel Kweku Botwe and members of the commission of Enquiries paid a courtesy call on the National House of Chiefs to brief the house on how far the Ministry and the commission have come with regards to their work.

The chiefs noted that the acute polarization and political tension that has engulfed the country lately is something everyone should be concerned with. The house expressed disappointment at the high incidence of gaping partisanship and the politics of equalization that has characterized discussions and debates on national issues, particularly in the course of programmes such as newspaper reviews on both radio and television shows.

“ These current partisan political discourse constantly degenerate into such rancour and acrimony putting the ordinary citizens in complete state of confusion though such programmes are meant to educate the pubic.

They regretted by this development, politicians sacrificing the truth for political expediency.

The membership of the house noted that such unnecessary partisanship in matters concerning the nation ought to be jettisoned and the national interest be made to stage center stage in public discourse.

“ It is only when these two dominant political groupings realize the essence of this admonition and place Ghana first in their dealings with each other that the political tension can be reduced to the barest minimum and assure the peace and steady progress of which this nation stand in dire need. The unhealthy practice of being partisan in everything that we do as a nation, must give way to the exhibition of that true spirit of nationalism and patriotism in all our discussions, for the good of Ghana,” they advised Ghanaians.

The Chiefs cautioned the populace and Politicians to desist from the practice whereby persons who are suspected to have engaged in offenses while holding political power and are invited by the police would be encouraged by their supporters not respond to such invitations.

“The police must be allowed to conduct investigations into instances of perceived or alleged criminal conduct particularly involving public office holders, no matter whose ox is gored . Its is only when the police are allowed to carry out their investigative duties that the truth or otherwise will be exposed. It does not augur well for our democratic progress and good order of this country for persons ,especially politicians, to seek to interfere and even prevent the Police from investigating complaints, all under the thin guise such procedures being an affront to their integrity. Let the police do their work for the truth to be revealed in all our dealings in public and in private life. While on this subject, the house also feels duty bound to admonish the Police to be fair in their dealings with the entire citizenry, for peace and tranquillity to prevail,” they passionately appealed.