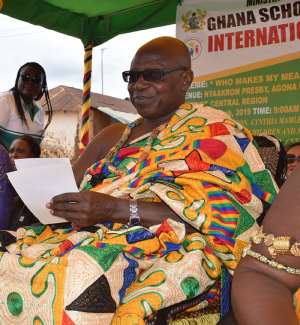 The Omanhene of Agona Nyakrom Traditional Area in the Agona West Municipality, Okofo Okatakyie Nyaako Aku X has applauded Government for improving and sustaining the Ghana School Feeding Programme (GSFP) which he said had significantly attracted several deprived children to enroll in school.

According to the Chief, but for the introduction of the programme, millions of children from deprived homes would have missed out of school, because many parents could not have afforded to send their children to school.

Speaking as the chairman for the International School Meal Day celebration organized by the National Secretariat of the GSFP at Agona Nyakrom, Okatakyie Nyaako Aku X was particularly impressed about the efforts made by the Member of Parliament (MP) for Agona West and Minister for Gender, Children and Social Protection, Mrs. Cynthia Mamle Morrison for helping more deprived schools in the area to benefit from the programme.

Closes to 7,000 deprived children from 24 deprived schools are currently benefiting from the Ghana School Feeding Programme in the Agona West Municipality alone.

Okatakyie Nyaako Aku X also praised the Gender Minister and the management of the GSFP for making it mandatory for caterers to patronize foods produced locally by farmers in various localities to improve the local economy.

He, therefore, appealed to the caterers to stick to the required standards of preparing one hot nutritious meal to the beneficiary pupils every day, to encourage them to continue to stay in school.

The Municipal Chief Executive (MCE) for the area, Mrs. Justina Marygold Assan commended the MP for Agona West, Mrs. Cynthia Morrison for prioritizing the wellbeing and the education of the vulnerable children in the area by increasing the number of GSFP beneficiary schools from 14 to 24.

The International School Meal Day celebration at Nyakrom was one of the most colourful events organized by the GSFP under the Ministry of Gender, Children and Social Protection.

It was graced by the Minister for Gender, Cynthia Morrison, the Acting National Coordinator of the GSFP, Dr. Mrs. Gertrude Quashigah, Director of Operations, Mrs. Doris Utuka Gaba, Deputy Director- Liaison for Development Partners, and other several stakeholders, including all the traditional rulers, development partners (World Food Programme, UNICEF, YEDENT, Amplifiers and Partnership for Child Development as well as about 1,000 pupils from some selected basic schools among others.

There was an exhibition of local dishes prepared with soy and eggs by the GSFP caterers and distribution of exercise books procured personally by the MP Cynthia Morrison and embossed with her photograph.