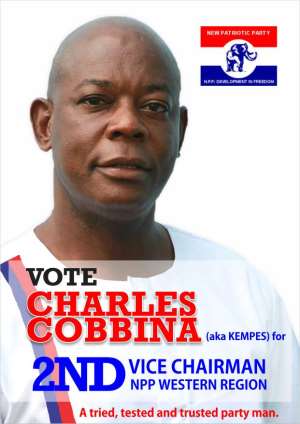 Mr. Charles Cobbinah, an aspiring Second Regional Vice Chairman of the governing New Patriotic Party (NPP) in the Western Region has launched his campaign ahead of the party’s Regional Delegates Conference slated for this month, April 21, 2018.

The party has officially selected UMAT’s George Grant auditorium at Tarkwa as the venue for the election.

He would come face to face with other contenders, but the unfazed politician believes, he remains the man to beat.

Declaring his motivation and aspirations at the launch of the campaign at Mpohor, the civil society activist turned politician said he would bring years of experience as a team player to enhance teamwork, present his wider network maggic as one craving quality for party development, and his years of social engagement with communities to create avenue for membership drive among other enviable qualities required to reposition the NPP in Western Region.

He said his main objective in running for the position, is primarily to influence activities at the top, for the party to win more than twenty seats and take over Western Region politically.

Explaining his relationship with the party, he said his membership, contribution to the success story of the NPP has never been in doubt.

For delegates going to make the ultimate decision on the faith of all aspirants, he said they must consider those who are capable of driving activities necessary to promote the philosophy and ideological underpinnings of the party.

Since 1992, when the party was formed, he said he among other things succeeded in playing diverse roles assigned him and contested for various positions in Greater Accra and Western Regions.

Consequently, he said the decision to join the regional race was calculated and fortified following the motivation he had from party stalwarts and the grassroot following.

He therefore promised that he would never disappoint them if he wins as the second regional vice chairman of the party.

He revealed that the falling heroes of the party, whose sacrifices, sweat and toil influenced the formation of the great Busia-Danquah tradition and subsequently the NPP was enough to serve as motivation for him to continue from where they left off.

As a result, he promised to influence the establishment of an award scheme to recognize hardworking NPP members if he gets the nod of delegates of the party and become an executive for the Western Region branch.

Known in private life as Kempes, Mr. Charles Cobbinah assured the chiefs and people of Mpohor that he would never disappoint them following the launch of the campaign in the mining community.

He explained the historical connection he had in the past with Mpohor, passing through the community to Takoradi and the brief stay he enjoyed living in the community four decades ago.

He paid gluing tributes to late Stephen Krakue, an indigene of Mpohor and one of the founding members of the NPP, and promised to revive what ever he stood for as an icon of the party.

Before the launch of the campaign, the gathering observed a minute silence for the late politician and other departed souls.