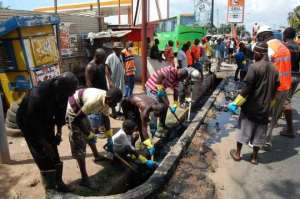 The exercises which are being done by various ethnic societies in the Church include the Northern, Ewe, Fantes and Akan, sought to ensure an epidemics free during the rainy seasons.

Last Saturday was the turn of the Northern Society, where membered of the group turned out in their number to clear filth and clean drains around the Adjei-Kotoku Community Health Post, around the Church and parts of the community.

Brother Dominic on behalf of the Priest in charge of the Church said the role of Christians is not only to seek prayers but to also keep the environment given to us by God clean, stressing ” cleanness is next to Godliness.”

He added that the Health Centre,” is for everyone in the community and ch exercise is a form of prayer and ministry to the health centre where the word of God is shared with the patients”.

Brother Dominic explained that the cleanup exercise organised by the Northern society in the Church is an annual exercise but done in turns for the various groups in the Church.

He, however, called on other religious bodies in Adjei Kotoku to emulate same to help keep the environment of the Community Health Post clean and safe from reptiles.

On her party, Leader for the Northern Society in the Church, Mrs Diana Dasoberi-Hamid said the cleanup exercise is to help keep the surrounding clean as the Health Centre is accessible by everyone in the community.

She noted that other Churches might need not to do clean up exercise but anything that could help the Health Centre to run smoothly in an acceptable environment as they presented some assorted items to the facility.

Mrs Dasoberi-Hamid said the Church and its ethnic groups would continue to embark on the exercises, explaining that the Ewe group has earlier done their turn and assured the Church would continue making the environment clean for human comfort.