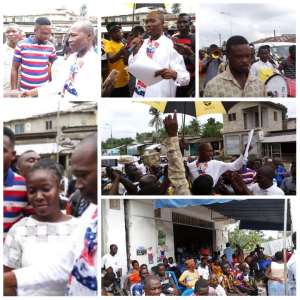 A business mogul, Mr. Joseph Apor Adjei popularly known as Boin, has picked nomination forms to contest for the NPP parliamentary primaries in the Ellembelle Constituency of the Western Region slated for September 28, 2019.

The current District Chief Executive (DCE) for Ellembelle, Hon. Kwasi Bonzoh has been running unopposed since 2012 but this time around, he is facing tight competition.

As of the time of filing this story, two NPP members including this business mogul have picked nomination forms to contest the Ellembelle DCE in the upcoming parliamentary primaries.

The Ellembelle DCE who has declared his intention publicly to contest for the third time is yet to pick nomination forms.

Since 1992, the New Patriotic Party (NPP) has not win the Ellembelle parliamentary seat. The seat is being occupied by the NDC’s MP, Emmanuel Armah Kofi-Buah

The occasion, which could be described as a rally, was characterized by a procession of NPP faithful and sympathizers and also over 200 delegates from the constituency who picked the nomination forms on his behalf through the principal streets of Aiyinasi amidst brass band music and dance on Friday, July 26, 2019.

Presenting the forms to Mr. Joseph Apor Adjei, the Polling Station Chairman of Baku, Mr. Saint Akpoh stated that the party has been divided into two camps adding the grassroot was looking for a unifier hence their support for Mr. Apor Adjei (Boin).

He added that the business mogul has the party at heart and has demonstrated to the rank and file of the party in the Constituency.

Mr. Akpoh disclosed that through Boin, the party could boast of an ultra-modern party office. He added that party was renting office for its activities.

“We are supporting him because he has the party at heart and for the first time the party can boast of an ultra-modern party Office. This office has a 250-seated conference room. Look at he has done for us, he has not becoming an MP but he has started resourcing the party. Please let us all support him”, he emphasized.

He opined that “He is a unifier. We the delegates need him to help more people in Ellembelle as he is doing”.

Receiving the forms, the business mogul, Mr. Apor Adjei thanked God, the NPP delegates and all adherents of the party for giving him the maximum support to contest to capture the seat for the party for the first time.

Addressing the enthusiastic gathering, Mr. Apor admitted that party in Ellembelle has been divided adding that the party can only win the seat if there was a unity.

He said the party needs unity, love and peace to win the Ellembelle seat for the first time in 2020.

He, therefore, charged the delegates to vote someone like him who has created job opportunities for the teeming unemployed youth and not anybody at all who doesn’t have a track record.

“We should also elect someone who has created jobs for the youth in the Constituency and beyond, so if you should rally behind me to become your MP to create more jobs”, he said.

He seized the opportunity to urge the delegates to investigate all the Aspirants to know their backgrounds before voting.

Mr. Apor emphasized that “Our primaries on 28th September will decide whether we NPP like unity or not, vote for me because I am a unifier to unite the party for victory”.

He concluded that “I have used myself as a sacrificial lamb for the party and I know you the delegates will elect me to win the seat for the NPP for the first time”.

Speaking to one of the delegates who picked the nomination forms for him, Samuel Ainooson disclosed that their move became necessary of the businessman’s committment and unwavering appetite in helping ordinary people especially youth within and outside the Constituency by already employing over 700 youth in the Western Region.

He added that “Most of these employees stay at his own building without paying utilities bill”.

“He is currently sponsoring over 30 Ellembelle students in various tertiary institutions in the country”, he testified.

He continued that “He has further helped 14 of his former employees to establish their own businesses and have tasked them to employ their colleague youth”.

He also credited Mr. Apor Adjei with the following initiatives as part of the reasons for picking the forms for him to ensure that he becomes MP for the constituency;

3. More Beyond Enterprise – Deals in agrochemicals in cocoa growing areas in the Western region.

He said “The needs of our party in Ellembelle and why we have not been able to ascend to the throne as MP, goes beyond the mother party providing all the needs of Ghanaians of which ellembele constituency is not exception”.

“Apart from the national party interest of seeking the welfare of the people, the party and individuals we elect to lead the party in the constituency must also bring something extra ordinary on board”, he emphasized.

“And as it stands now job creation is our major problem in the country”, he added

“The youth of today are not interested in how big is your billboard, the number of roads, hospitals, schools you have built and the scope of your campaign but HOW MANY LIVES have you changed economically by creating sustainable jobs for them” and further indicated that Mr. Joseph Apor Adjei is the brain behind the Nzema Chamber of Commerce and industries (NCCI) which has mobilized businesses in the Nzema land for united voice and development of which he is the chairman.

“If Joseph Apor Adjei has single handedly created at least sustainable businesses and job for most of our people at the private level within and outside Ellembelle Constituency with least resources. What do you think will happen when he’s given the mandate to lead our party in Ellembelle, the group asked?”, he asked.

He was of a firm belief that the only successfully married and PHD student among the competitors is not coming into politics to enrich himself but to save the youth from the growing unemployment in the Constituency and beyond. 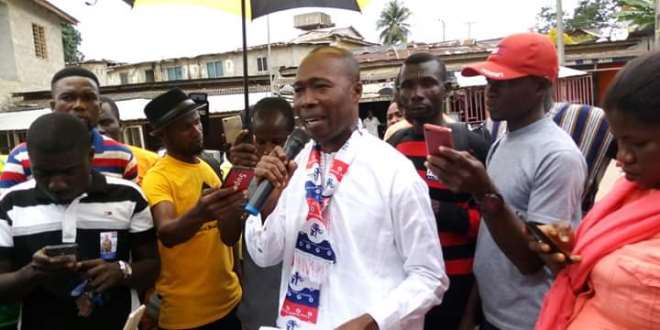 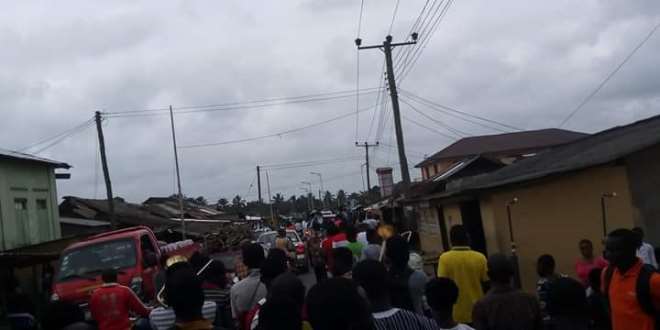 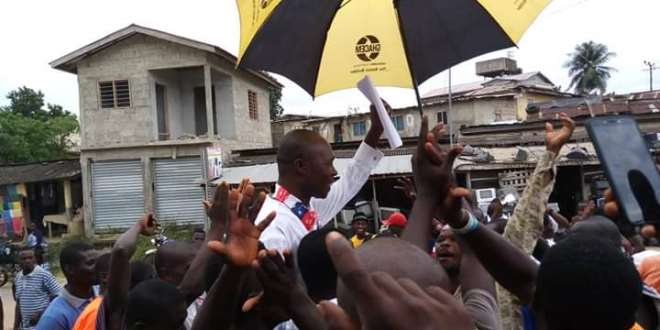 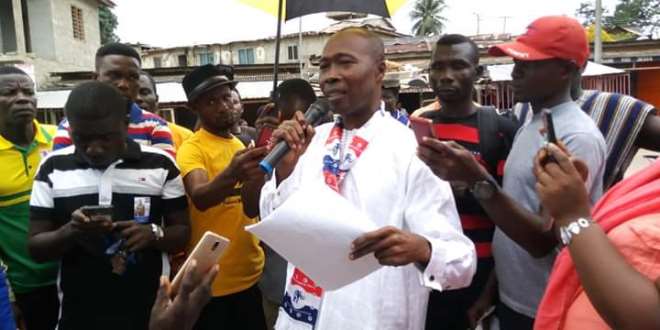 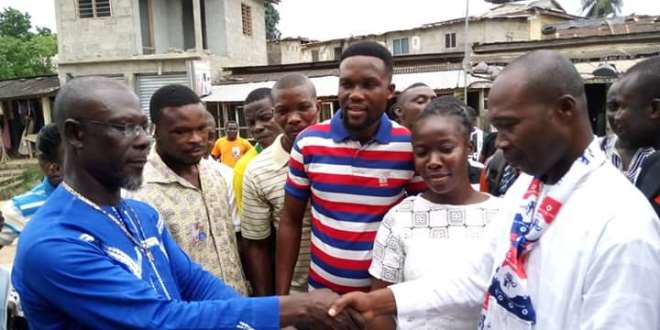 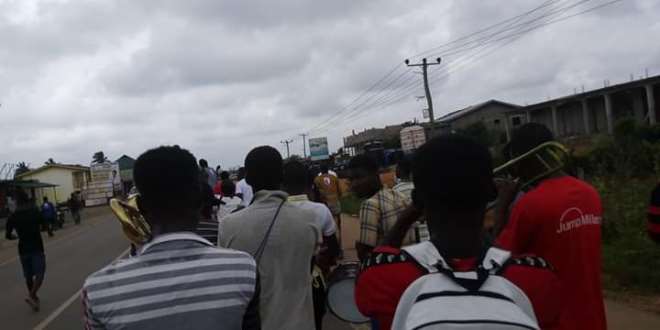 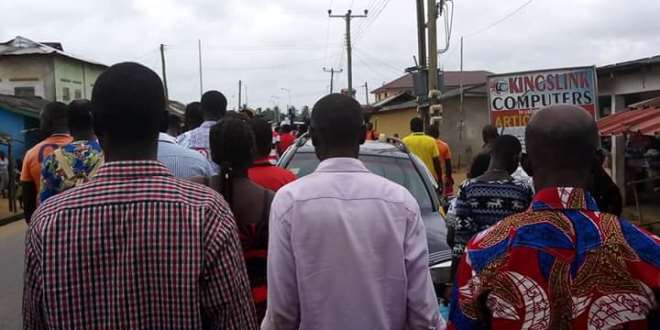 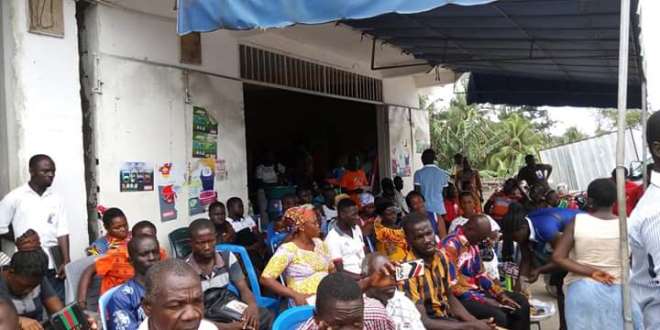 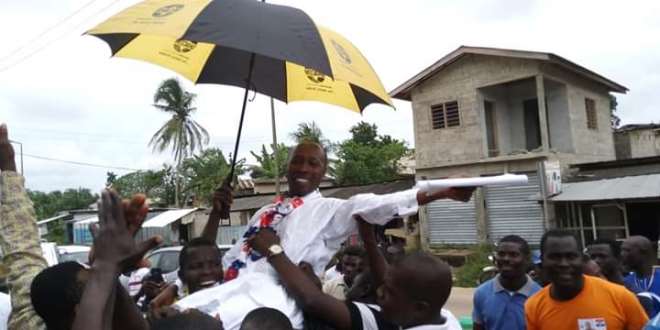 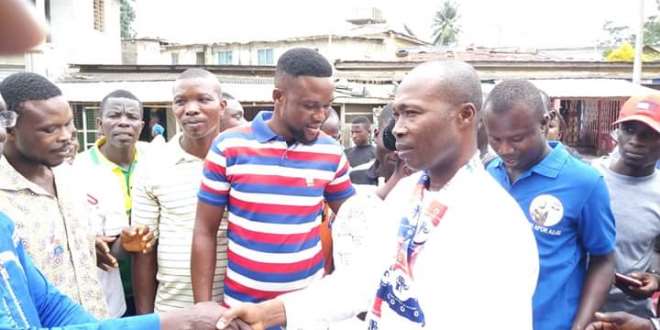