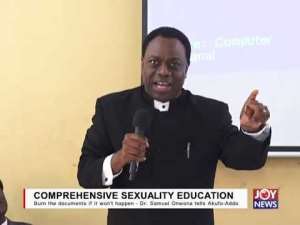 According to Dr. Onwona, since the president has said the CSE will not be allowed in schools, there is no need to be keeping documents that have the CSE in it.

“If you say it is not going to happen under your presidency, then show us the destruction of the manual, because it’s been produced, they have copies.”

Churches and other conservative groups in Ghana have been alarmed at the supposed introduction of CSE, believed to subtly condition pupils to explore LGBT lifestyles.

Both the Ghana Education Service and the Education Ministry have come out to deny the claim.

President Nana Akufo-Addo, addressing members of the St. Cyprian Anglican church emphatically stated that there will be no introduction of any subject that will negatively affect the moral upbringing of children.

However, conservative groups in Ghana have been calling for firmer actions to be taken to hinder the introduction of comprehensive sexuality education.

Dr, Onwona said, the supplementary budget the Minister of Finance had allocated for the implementation of the CSE should be allocated to other national projects.

“In the supplementary budget of the Minister of Finance, there is a paragraph on CSE…so if the president says it’s not happening, we want to see that money allocated to something else.”

He added that the president by simply stating that CSE won’t be taught in schools is not definite enough.

He has therefore called for the physical destruction of all CSE materials.

Watch him make the comments in the video below: