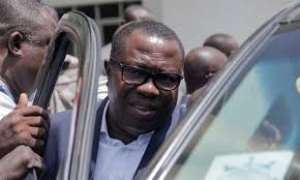 According to sources, Mr. Ampofo was picked up by the police in the afternoon on Tuesday, June 11, 2019.

The arrest, which is linked to the recent kidnapping cases, follows his refusal to honor an invitation to report to the Director-General of the Criminal Investigations Department (CID), Maame Yaa Tiwaa Addo-Danquah, to assist in investigations into the recent spate of kidnappings and arson in the country.

The CID was reported to have stated that the NDC Chairman’s name has been mentioned by a suspect allegedly behind the kidnappings in the country, a situation which informed the police to invite him.

However, Mr. Ofosu Amofo declined the invitation. His party accused the ruling government of malicious attempt to use the police to intimidate and frustrate their Chairman especially, running into the 2020 general elections.

Already, Mr. Ofosu Ampofo is standing trial on two counts of conspiracy to cause harm and assault against a public officer after a voice alleged to be his was heard inciting the party’s communicators to launch verbal attacks on the Chairperson of the Electoral Commission, Mrs Jean Mensa and the Chairman of the National Peace Council, Prof Emmanuel Asante and also, kidnap relatives of political opponents.