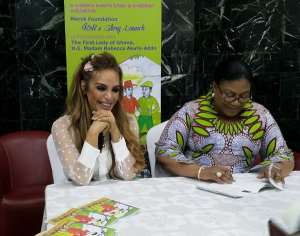 Merck Foundation, in partnership with the First Lady of Ghana, Rebecca Akufo Addo, have launched a book aimed at breaking the infertility stigma which hangs on women.

The book titled “Kofi’s Story”, targets young children, with the objective of educating and sensitizing them on issues of infertility, so they would grow into adulthood fully equipped to help break the stigma.

The core objective of the book is that infertility is not always the fault of women and that men too can be infertile.

“Kofi’s Story” tells of how a man rejected the idea and pressure from his friends to marry another woman because his wife had not had a child yet.

With patience, love, tolerance, and understanding, the couple later had a child after tests revealed that their barrenness was the man’s fault and was treated.

The morale lesson here, then, is that men should support their wives when society turns against them in such a situation, and offer the necessary help.

In an address, the President of Merck Foundation, Dr. Rasha Kelej, stressed that some women are suffering in their marriages or in the society because they have not had children of their own.

Mostly, the general perception that when a marriage fails to produce a child, it is the woman’s fault; however, women should not be the only one to be blamed because men can also be the cause, Dr. Kalej noted.

Given the above, Dr. Kelej said it was time to also educate the young ones on the issues, while campaigns are ongoing to get older ones and adult to stop stigmatizing women who have no children.

She added that violence, abuse of women, and the unfair treatment meted out to them in the name of infertility must all change.

Dr. Kelej revealed her desire to ensure that such stigmatization is eradicated in Ghana, hence, the Foundation’s decision to partner with the First Lady who is already championing some women-related issues.

“Women should not be the only ones receiving the blames for childlessness because men too can be infertile. And so we have partnered with the First Lady to raise awareness and break the stigma,” Dr. Kelej said.

For her part, the First Lady advised women not to let their world be shaken by their inability to have children.

She said every woman is more than a mother, as well as every man being more than a father, and so with or without a child, life must be well-lived.

Mrs. Akufo-Addo also reiterated that empowerment focus would continue to be on the youth who are the future of the country.

To her, love and patience conquer all things in a marriage whether or not there are children, as portrayed by the “Kofi’s story”.